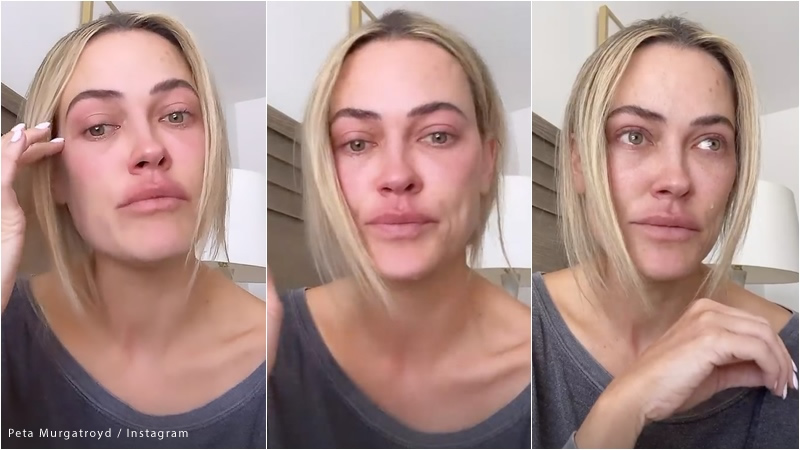 ‘DWTS’ pro-Maksim Chmerkovskiy left Ukraine earlier this month to return to Los Angeles with his wife and children.

Peta Murgatroyd says the war in Ukraine is breaking her heart.

As Russia’s invasion of Ukraine continues to grow, Maksim Chmerkovskiy’s wife took to Instagram on Wednesday to tell her nearly 1 million followers that she has been “struggling to get through some days.”

The 35-year-old broke down in tears while speaking on her Instagram Story, claiming the war “continually breaking my heart.”

“Sometimes I have great days. Other days I have terrible days because I just can’t get this out of my head. I’ve walked those streets. I’ve been there. It is such a beautiful country,” she said in the emotional video.

Murgatroyd also mentioned Chmerkovskiy, her husband. The professional ballroom dancer documented his trip home to Los Angeles from Ukraine earlier this month. When Russia first invaded Ukraine on February 24, the 42-year-old was in Kyiv.

Murgatroyd said that “just because” her husband is “home, for now, does not mean we aren’t continually doing stuff to try to help.”

“We are continually thinking about what is going on every single day. Please be aware of that,” Murgatroyd added.

In a separate Instagram Story posted earlier on Wednesday, Murgatroyd wrote: “I can’t stop sobbing over these children!!! Wtf!!!! This has to stop. I never want to know what these parents are going through.”

She also released a nearly three-minute video on her Instagram account earlier Wednesday, showing explosions across the country and families being split as a result of the carnage. In her caption, she referred to it as a “catastrophe.”

“I want to bring all the children to my home. I want all of them. I wish I could. I wish the sky could close. I wish I could take away the parent’s pain,” she continued in her caption.

Murgatroyd also commended her “best friends,” “DWTS” alum Lacey Schwimmer and her partner Frankie Moreno, who recently released the single “Upside Down.” She stated that all revenues from the song will be donated to assist and care for animals in Ukraine.

As per Foxnews, when Chmerkovskiy returned to Los Angeles from Ukraine in early March, he had an emotional reunion with his wife. After arriving in Warsaw, Poland, Chmerkovskiy boarded a Finnair trip to the United States.

Chmerkovskiy and Murgatroyd were photographed embracing after he landed at the Los Angeles International Airport (LAX).

Chmerkovskiy was using his social media account to post photos and videos from the ongoing war. He informed his 1.1 million Instagram followers that he had been arrested in Ukraine at one point.