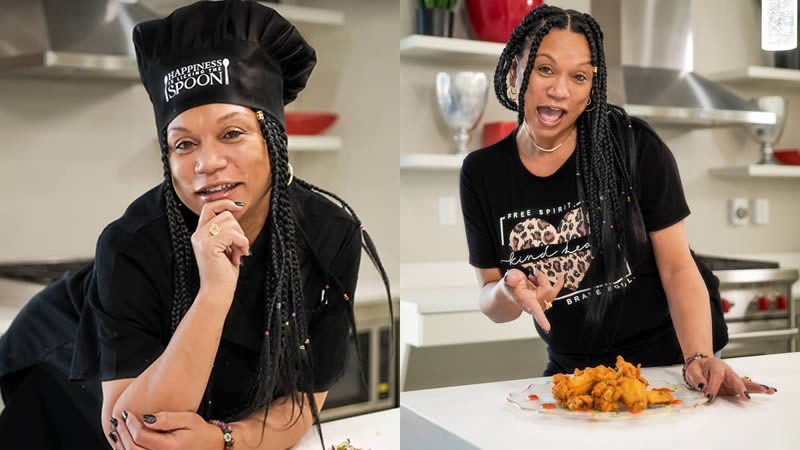 “Cooking with OhSoBella” premieres on Paradox Universe on February 1st, just in time for Black History Month. According to producer-director Joseph Mbah, six episodes have already been recorded.

The show, which is primarily aimed at young African-American women, allows Brown “to be herself and have fun creating great dishes in the casual, ‘regular folk’ way,” according to Mbah.

The action takes place in a typical TV studio kitchen, but that’s the only thing conventional about “Cooking with OhSoBella,” he promised.

“There’s no hiding the blemishes—sometimes Christine’s ingredients don’t all end up in the mixing bowl, sometimes she blurts out profanities when things don’t go right, sometimes she even does spit-takes while drinking bottled water when she can’t believe what she’s just seen or heard from her guests,” Mbah explained. “Christine makes mistakes and laughs about it and we keep it all in. The bloopers are baked into the show, which is an embrace of everyday cooking’s imperfections.”

Mbah—who is also the CEO of Paradox Universe—said Brown has long hungered to serve up this type of program.

“But everyone she collaborated with to make her ideas a reality kept trying to push her into formulaic presentations that have been overdone and that audiences are tired of seeing,” Mbah offered. “All Christine wanted was a show where she could truly be herself and have a grand old time creating magic in the kitchen. Paradox Universe alone was able to catch her vision and make it happen.”

Mbah said he believes “Cooking with OhSoBella” (OhSoBella is Brown’s Instagram handle) will be a rating success because “we’ve all had it up to here trying to be ‘perfect’ in the kitchen and in other aspects of our lives. This show is about being normal and appreciating that normal is cool.”

Each episode isn’t just about food, Mbah indicated. “Christine will also be sharing stories about her life’s journey,” he said. “The food is her way of exploring different cultures—and doing so by taking a unique, healthy, and soulful approach.”

Brown shows how to make drunken fried chicken, a childhood favorite from the Deep South, in the first episode.