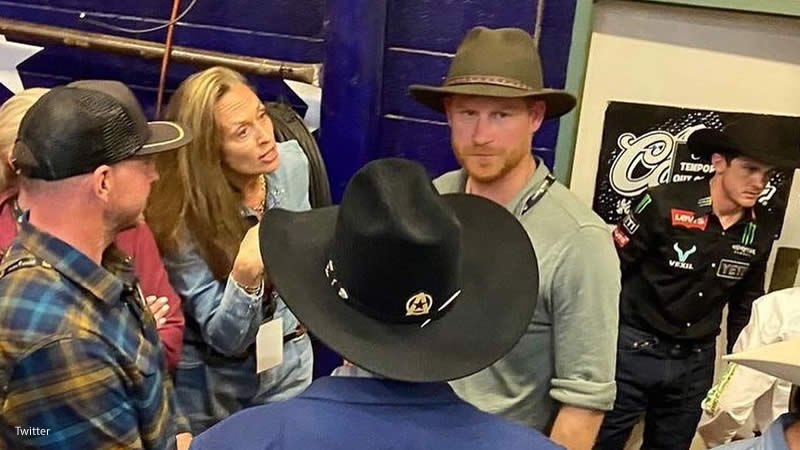 Prince Harry flew solo over the weekend to visit Fort Worth, Texas.

During the Stockyards Championship Rodeo at the Cowtown Coliseum in Fort Worth on Saturday, the Duke of Sussex was spotted blending in with the locals while watching bull riding events, according to People Magazine.

Royal correspondent Omid Scobie tweeted, “The duke was spotted by locals enjoying some good ol’ Southern hospitality and a VIP tour of the venue.”

Cindy Reid, the secretary of the Stockyards Championship Rodeo, posted a photo of the 37-year-old father-of-two on social media on Monday.

“Where was Prince Harry Saturday night? Oooooh, just hanging out behind the bucking chutes at the Stockyards Championship Rodeo!! Loooove it!! Thank you for the visit!!” Reid captioned an Instagram photo of Prince Harry in a brown cowboy hat and a green shirt.

As per Page Six, the image was also shared by bull-rider-turned-trainer Cory Melton’s company Melton Bull, however, it is no longer visible on the Instagram page.

“Prince Harry hanging out at the rodeo this week,” People quoted the caption of the post as saying. “We get a lot of rodeo royalty, but this is the first prince I’ve seen. [He] said he was going to enter the bull riding, but the airline lost his rigging bag…”

On social media, there were varied reactions to Prince Harry’s presence at the rodeo. Some were unimpressed because he appeared to be supporting the activity, despite the fact that his wife, Meghan Markle, is a long-time animal rights advocate.

“Honestly, [I] cannot believe he was there. Animals aren’t ‘forced to perform,’ they are abused and brutalized. I come from a horse/animal background. I know what I’m talking about. Being from [Los Angeles], [I’m] not sure if [Meghan] understands everything involved. But this was disappointing,” one Twitter user commented.

“Any idea why [Prince Harry went to the rodeo]? I grew up in the area and went to rodeos, but I can’t stomach them knowing how awful they are to animals,” a third person commented.

However, other Twitter users were glad to see Prince Harry “living his best life,” more than a year after he and Markle made their royal departure permanent.

“I love that he’s experiencing the different things this country has to offer,” one user wrote.

“Love this,” another commented. “America has welcomed Harry, and he’s immersing himself in American culture. Go on Harry, stay blessed, and continue to shine bright.”

A third fan commented, “Harry coming to my home state was not on my 2022 bingo card! I’m so in my feelings right now!”

This wasn’t the first time Prince Harry had gone to an iconic American experience without his wife in recent weeks.

He also made an appearance with his cousin, Princess Eugenie, at the 2022 Super Bowl in Los Angeles last month. According to People, Prince Harry paid a visit to the locker room of the Los Angeles Rams following their comeback victory over the Cincinnati Bengals.

Continue Reading
You may also like...
Related Topics:Prince Harry