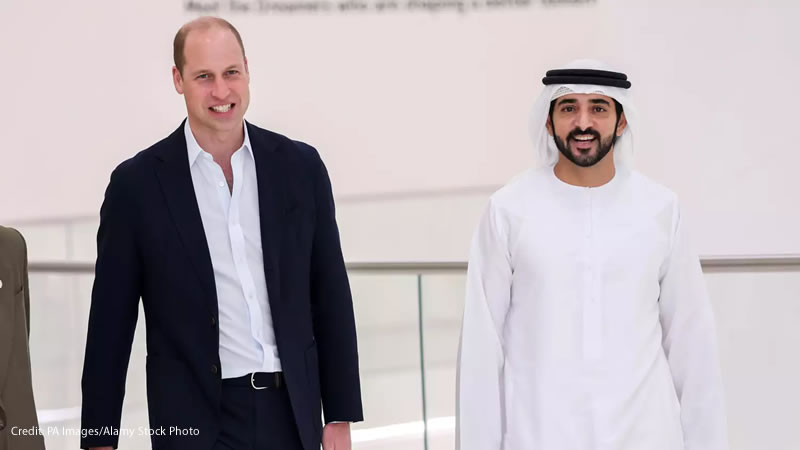 As the Cambridges prepare for a crucial Commonwealth trip to Jamaica, the Duke of Cambridge arrived in Dubai on Wednesday night and said he was “excited” to exhibit British talent.

The Duke’s brief visit to Dubai is his first official visit to the United Arab Emirates and his first overseas trip in over two years.

It comes as the Duke and Duchess of Cambridge take on more royal duties, allowing the Queen, 95, to take a step back.

They will go to the Caribbean in March, where they will visit Belize, Jamaica, and the Bahamas.

The visit will take place at a critical point in the Commonwealth countries in the region discussions over the Queen’s role as head of state.

Barbados became a republic last year, and politicians in Jamaica and Belize have suggested that they may follow suit.

The royals are slated to come in March, according to the Jamaica Gleaner newspaper, although no details about their visit have been disclosed.

The tour will take place in August, which marks the 60th anniversary of Jamaica’s independence from the United Kingdom.

A post shared by Duke and Duchess of Cambridge (@dukeandduchessofcambridge)

As he landed in Dubai, the Duke issued a personal tweet, signed “W”, that said: “Excited to be arriving in Dubai to celebrate the UK at Dubai Expo and discuss the vital issue of working together with the UAE and international partners to achieve a more sustainable world with @earthshotprize and United for Wildlife.”

The Duke paid a visit to the Jubail Mangrove Park in Abu Dhabi’s wetlands to hear about efforts to protect flora and fauna from the region’s urban growth, as well as to promote his own United for Wildlife campaign, which combats illegal wildlife trading.

Earthshot winners will compete in a Dragons Den-style competition.

He’ll participate in a Dragons Den-style project with the finalists of his inaugural EarthShot Prize on Thursday.

The Duke will also attend Expo 2020 Dubai, which will hold UK National Day, a display of British talent that will include a parade through the site of the Birmingham 2022 Queen’s baton relay, which was launched by Her Majesty at Buckingham Palace last October.

He’ll kick off the first-ever Earthshot Prize Innovation Showcase, where the 2021 winners will propose their ideas to a worldwide audience of investors, business leaders, and philanthropists.

As per Yahoo, the Earthshot finalists will discuss their ideas at the networking event, which is designed to connect them with individuals who can help scale up their solutions and accelerate their impact, in a nod to the Duke of York’s now-defunct [email protected] initiative, which brokered deals between tech start-ups and wealthy investors.

The environmental initiative, which will offer £50 million in awards over ten years, was founded by the Duke of Cambridge to develop answers to repair and protect the planet.

The five 2021 winners were each awarded £1 million to help fund their projects, which included plans to restore coral reefs, redistribute unwanted food to the poor in Milan, and combat air pollution in India.

At the Expo event, Queen Rania of Jordan, a close friend of the Royal family and a member of the Earthshot Prize Council, will speak.

A celebration of British talent

The Duke will also attend a UK celebration at the world fair, which has been postponed from 2020, and will meet British sportsmen participating in the Queen’s baton relay, which was launched by the Queen and the Earl of Wessex on the forecourt of Buckingham Palace last October.

It will be carried around the Expo site in Dubai to different Commonwealth Pavilions, where the Duke will be shown displays and demonstrations of British talent.

He will observe goods being unloaded from container ships, screened for suspicious things, and inspected by customs during a visit to Jebel Ali Port, the Middle East’s busiest port.