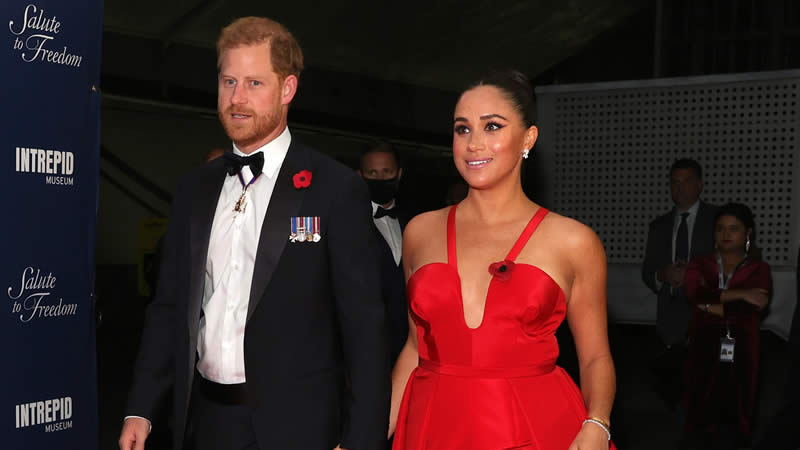 Meghan Markle stole the show with a surprise red carpet appearance on the arm of her husband, Prince Harry.

On November 10, the pair attended the 2021 Salute To Freedom Gala at the Intrepid Sea, Air, and Space Museum in New York City to commemorate Remembrance Day, also known as Veterans Day in the United States.

It had already been stated that Harry will be a presenter at the military event, but no mention of Meghan had been made.

This week, the couple has been preoccupied with their personal undertakings in preparation for Wednesday’s Gala. Meghan spoke at the New York Times’ Dealbook Online Summit about the importance of paid parental leave for all and economic equality for women, while Harry spoke at a recent WIRED magazine conference about misinformation online.

Meghan was expected to stay in California with the couple’s two children, Archie and Lilibet, while Harry attended the gala alone.

Meghan, on the other hand, stunned the audience with her unexpected presence, dressed in a red Carolina Herrera gown that took everyone’s breath away.

The dress included halter-like straps and a plunging neckline, as well as a fitted underskirt with a high slit up the front, which was layered beneath a fuller second layer that flowed out like a train from the back.

In honor of Remembrance Day, she wore the stunning gown with a pair of deep red Giuseppe Zanotti stiletto pumps and a poppy pinned to her chest.

The duchess let her outfit speak for itself, wearing only a few accessories. However, eagle-eyed royal fans noticed Meghan was wearing her late mother-in-law Princess Diana’s diamond tennis bracelet.

The mother-of-two had her hair in a sleek ballerina bun and kept her make-up very simple with a glossy nude lip and burgundy winged liner under a set of false lashes.

Prince Harry, who wore a basic black tuxedo with his military medals pinned to his blazer, let his wife shine on the evening.

As the royal couple arrived, reporters and photographers greeted them, but one question cut through the noise and reached Meghan.

“Meghan, are you proud of your husband?” a reporter asked in a clip shared to Instagram.

She turned to look over her shoulder and replied with a smile: “I’m always proud of him”.

Another called out to Harry asking how his grandmother, the Queen is after a recent health scare, to which the duke responded: “Great, thank you”.

The royal couple arrived holding hands, briefly breaking apart to chat with a few of the notable attendees before stepping inside together.

It’s one of the couple’s first major red carpet appearances after leaving the monarchy in 2020, but Meghan’s outfit is giving fans a serious case of deja vu.

Her outfit is similar to the one she wore to the Mountbatten Festival of Music at the Royal Albert Hall in March 2020, which was one of her and Harry’s final official engagements as senior royals.

Meghan wore a red Safiyaa cape dress and wore her hair long and straight for the occasion, while Harry was dressed in military uniform.

After more than a year, the duchess looks to have recreated the look that was so popular among royal fans at the time.