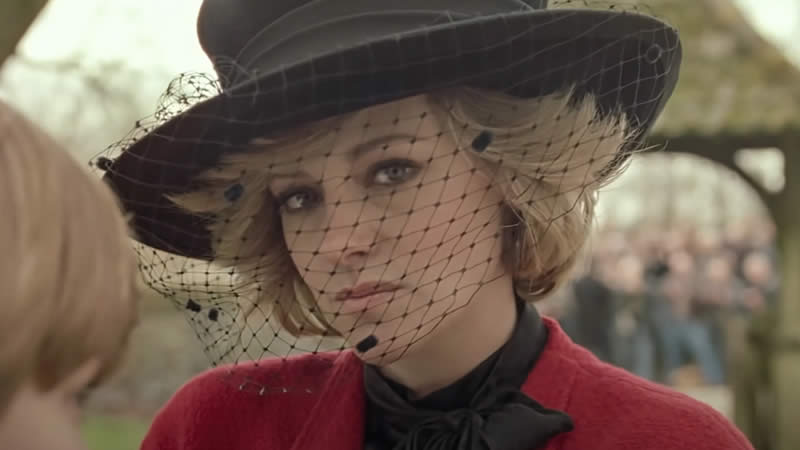 The highly anticipated film Spencer, featuring Kristen Stewart as Princess Diana, has it all: William and Harry are young and rosy-cheeked. A plethora of vintage Chanel stunners. Pheasants. Stewart’s recent engagement to fiancée Dylan Meyer is referenced in an Easter egg. (Alright, not that.)

However, Lady Di and Maggie, a favored dresser and maid played by Oscar candidate Sally Hawkins, have an exclusively lesbian moment in director Pablo Larran’s picture, which opens in theatres on November 5.

Spencer takes place on a royal family vacation at Norfolk’s Sandringham Estate in the year Diana finally decides to divorce Prince Charles (Jack Farthing) after a notoriously tumultuous marriage. According to press notes, the film presents “an imagining of what might have happened during those few fateful days” in December 1991.

Diana has her job cut out for her as she prepares for a homosexual Yuletide holiday weekend. She only needs to put the correct one on and then spend every rigorously scheduled waking minute pretending that everything is fine while she is clearly unhappy.

The deep emotional problems that the people’s princess faces are handled with amazing sensitivity by Stewart. Her Diana is fighting inner demons while living out what is ostensibly a wonderful fairy tale. She also has an uncanny resemblance to the late princess in terms of voice and appearance.

However, royal fans may observe that Hawkins’ Maggie is a previously unknown face among the cast of performers portraying real-life individuals, such as Jack Nielen and Freddie Spry as Diana’s beloved sons.

Diana’s fundamental conflict throughout the film is wearing the clothing that has been picked for her and therefore preserving an image of beauty and contentment. As a result, it’s understandable that her connection with Maggie would be strained.

Maggie understands. She listens to Diana without passing judgment, appears to grasp the immense pressure she’s under and doesn’t discard Diana when she refuses to wear the look that has been planned for her. Diana is understandably upset when Maggie is sent away, possibly for all of the reasons stated above. She has few other people to turn to for consolation if she isn’t with her. She goes so far as to contact Anne Boleyn’s ghost. These are desperate times.

Maggie returns to Sandringham and confesses her love for the boss in a twist near the end of Spencer. Not the platonic type, as a loyal lady-in-waiting and a dazzling princess, would have. Maggie loves, loves Diana, she says.

They’re at the beach, and everything is incredibly lovely. Diana chuckles and deflects in a nice manner. They frolic down the coastline, and that’s pretty much it for their future connection.

So, did Diana have a gay maid with whom she had a secret, if unrequited, love affair? No, not at all.

Hawkins is a fictional character, according to Spencer’s representatives. in the body of an email Maggie’s queer crush on Diana is a work of fiction, part of the movie’s ostensibly “imagining” of what happened behind all those magnificent and sometimes closed royal doors.

However, we do know that Diana had a gay butler, Paul Burrell, who worked for her until her death in 1997. Burrell stated that only Diana had known about his sexuality when he came out as gay in 2017.

The 63-year-old Derbyshire native has openly discussed his time working for Diana. Burrell’s first memoir, A Royal Duty, was published four years after her death and was condemned by Prince William and Harry as “a cold and overt betrayal” for allegedly breaking their mother’s privacy and trust. The Way We Were: Remembering Diana, written by Burrell in 2007, was a follow-up to The Way We Were: Remembering Diana.

Following Diana’s divorce from Prince Charles, which is presaged in Spencer, “the assiduous Paul Burrell became maître d’ of her private life, combining the roles of P.A., man Friday, driver, delivery boy, confidant, and crying towel,” Tina Brown wrote in her book out that same year, The Diana Chronicles.

Burrell’s relationship with Diana has been colored by controversy, and what was most likely his desire for celebrity (Burrell went on the fourth season of I’m a Celebrity…Get Me Out Of Here! in the United Kingdom). The bond that Larran imagines between Diana and Maggie, on the other hand, appears to be of a different nature.

As per Them.us, Hawkins’ character appears to be little more than a plot device for much of the film, a sentient sounding board for Diana’s worries at her most vulnerable times. Maggie, it could be said, isn’t much more than that. Her declaration of love appears to come out of nowhere; a cynical view may suggest that Larran couldn’t conceive a close relationship between women that wasn’t at least a little gay.

However, a more sympathetic view would consider Diana’s close association with a lesbian confessor as a subversive form of solace for the princess, who was otherwise suffocating under the constraints of tradition. In any case, Stewart gets a smidgeon of a homosexual story aspect in a historical drama, and that’s a win in our book.

This kind of speculation about the royals’ private life is a big part of the public’s attraction to them. Who’s to say there isn’t more queerness lurking behind the iron walls than we previously imagined?