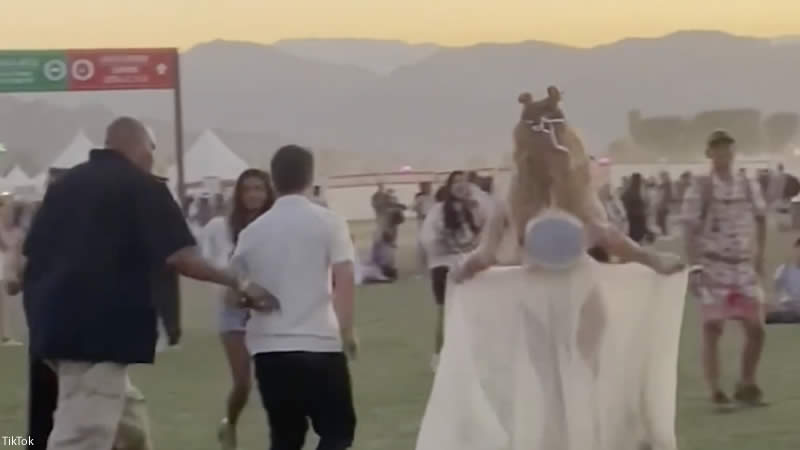 Her bodyguard was not in a good mood.

On TikTok, a video of Paris Hilton’s bodyguard chasing her down while she danced at Coachella has gone viral.

As per reported by Elle, Hilton, 41, appeared to be a celestial being as she spun around in a sheer outfit at the music festival, and while she appeared to be having the time of her life flitting around, her bulky security appeared exhausted as he quickly trailed behind her to keep track of her.

“The way Paris Hilton’s bodyguard has to chase after her in the desert heat as she skips away,” a fan captioned the video.

The DJ herself reposted the clip to her own social media, where the caption stated, “it’s a workout keeping up with the sliv queens.”

Several followers took to the video’s comments sections on TikTok and Instagram to mock the buff guy, who appeared to be more of a tired chaperone than a bodyguard.

“It’s her own world we’re just living in it,” a second person said.

“That is so iconic Paris,” a netizen gushed, with another agreeing, “COACHELLA QUEEN we love you.”

“That run [laughing emojis] u can tell he was dying of heat.” another sympathized.

“I only want to see celebrity bodyguard footage from now on. I do hope they’re paid enough,” one more wrote.

The original video received over 700 likes and nearly 5,000 comments by Monday afternoon.

Hilton released her podcast Trapped in Treatment earlier this year, which details her and others’ experiences in Utah’s Provo Canyon School.

In the podcast, Hilton and other former residents of congregate-care homes discussed the “dark secrets and controversial practices” of such organizations.

“Sharing my story publicly was the most healing experience of my life,” Hilton told Newsweek in January.

“I created Trapped in Treatment to give survivors, employees, and family members the opportunity to share their truth,” she added.