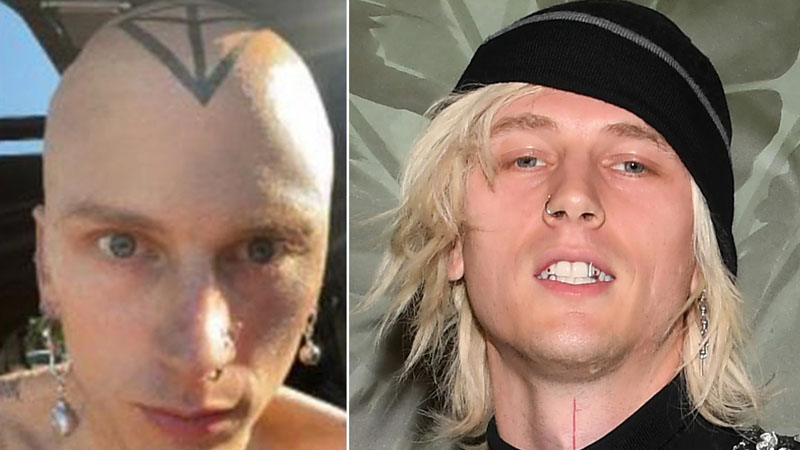 Rapper and songwriter Machine Gun Kelly showed off a new look when he shared a picture of himself on social media with a gorgeous head tattoo in place of his hair.

It would be a bald-faced lie to say that Machine Gun Kelly needs to get his hair under control.

On Tuesday, Aug. 10, the 31-year-old singer revealed that he had recently shaved off all of his signature blonde locks in a photo posted to social media. Given that his Instagram bio just states “the Blonde Don,” this is a significant identity shift.

His social media post was part of an effort to promote the music video for his new album, Born with Horns, which features the first single.

“I shaved my head for this @_ColeBennett_ ‘papercuts’ tomorrow 9 pm,” MGK captioned his Instagram photo for the video, directed by Cole Bennett, drops Wednesday, Aug. 11.

That said, his fans appeared to be skeptical that the hairstyle change is real, with one fan writing, “don’t lie we know it’s a bald cap.”

Machine Gun Kelly shared a video on Instagram on Aug. 9, of himself and frequent collaborator Travis Barker showing off matching “Born with Horns” tattoos on their forearms. MGK captioned it at the time, “‘born with horns’ the album,” “we’re back for round two…”

According to EONLINE, the star looks to be concentrating on his current music projects rather than his newly released film work. He met Megan Fox on the set of Midnight in the Switchgrass, which was released last month, but MGK made it apparent that he wasn’t happy with the film before its release.

The “Bloody Valentine” vocalist tweeted on July 23, “If I don’t talk or tweet about a movie I’m barely in it’s because it’s [trash can emoji].”