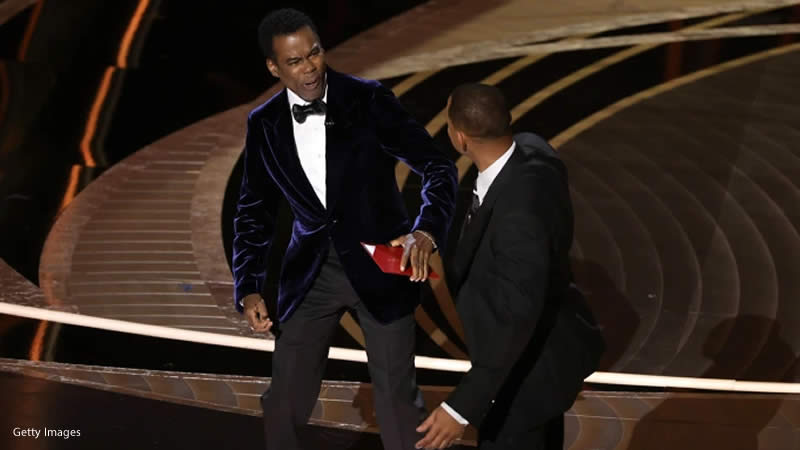 What happened just now? The moment from Sunday’s Oscars that everyone is talking about wasn’t Will Smith winning the coveted Best Actor award — it was when he smacked Chris Rock in the face.

Later that night, during his acceptance speech, Smith confirmed the incident. He apologized to the Academy, but not to Rock, and explained how he feels compelled to “protect” people in his life. Tonight, that person was his wife, Jada Pinkett Smith.

It all happened when Rock appeared to present an award for Best Documentary. On stage, the comedian made a joke about Pinkett Smith, who was sitting in the audience next to Smith.

Smith appeared to be laughing at first, while his wife did not appear laughing at the joke. (The Red Table Talk host has been open about her alopecia, or hair loss condition.) Smith stormed the stage, hitting Rock in the face before returning to his seat.

While most of the interaction was muted on US television, an uncensored version aired internationally, giving the confrontation the appearance of being unrehearsed.

“Will Smith just smacked the s*** out of me,” said Rock after the incident, seemingly stunned.

“Keep my wife’s name out your f***ing mouth,” yelled Smith from the audience.

Rock went on to present the award, but stumbled a little during the introduction and appeared legitimately shocked. Following the show, the next presenter, Sean “Diddy” Combs, offered to mediate between the two men.

Reporters working inside the Dolby Theater confirmed the incident immediately. Smith’s famous friends reportedly had to calm him down after the incident.

“Richard Williams was a fierce defender of his family,” Smith began, visibly emotional. “In this time in my life, at this moment, I am overwhelmed by what God is calling on me to do and be in this world.”

Smith then revealed what fellow Best Actor nominee Denzel Washington had told him a few minutes before: “At your highest moment, be careful. That’s when the devil comes for you.”
Smith said he wants to be “a vessel for love.”

“I want to apologize to the Academy; I want to apologize to all my fellow nominees,” he said. “This is a beautiful moment and I’m not crying for winning an award. … Art imitates life. I look like the crazy father, just like they said about Richard Williams. But love will make you do crazy things.”

In a statement released after the ceremony, the Academy of Motion Picture Arts and Sciences, the organization behind the Oscars, issued a statement saying that it “does not condone violence of any form.”

Yahoo reached out to Rock and Smith’s representatives but did not receive immediate responses. Smith also declined to speak to the media after the show in the press room.

Continue Reading
You may also like...
Related Topics:Will Smith