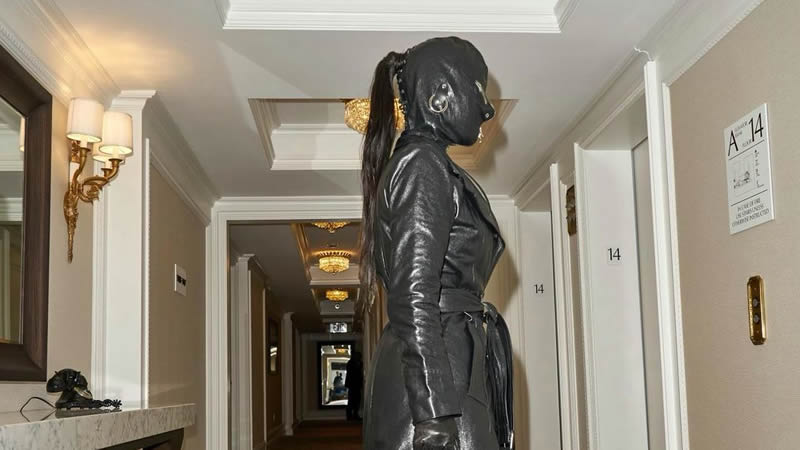 The founder of KKW Beauty was spotted in a leather suit wrapped from head to toe. She was dressed in a black trench coat with a belt around her waist, high-heeled over-the-knee boots, matching gloves, and a mask that zipped across her face and eyes. She completed her look with a crystal-covered handbag.

If you spotted Kim Kardashian West in New York City this weekend, you might not have recognized her.

Her dress was both expensive and daring. Her Vetements coat is already sold out but previously retailed for $2,900. The same can be said for her Balenciaga bag, which cost nearly $5,000 when it was available.

The Balenciaga boots worn by Kardashian West are still available, although in limited quantities. At the time of writing, they cost approximately $969.

The social media queen has not shared why she wore the outfit, but she did post four pictures of the look on Instagram.

Some photos showed her standing from the side, revealing that her leather face covering had an opening in the back that allowed her to keep her hair in a ponytail.

Kim Kardashian used only a knife emoji: “🔪” for the caption of her post.

Kardashian West has been seen wearing a number of all-black ensembles in recent weeks. She donned a black off-the-shoulder top with a train and matching leggings previously, as well as a leather minidress with a trench coat and boots days earlier.

Several commenters claimed that Kardashian’s estranged husband, Kanye West, is responsible for the leather style, which could be true. Over the last few months, the rapper has been donning a series of elaborate masks, including a black mask that he wore while promoting his new album, Donda, last month.

Continue Reading
You may also like...
Related Topics:Kim Kardashian