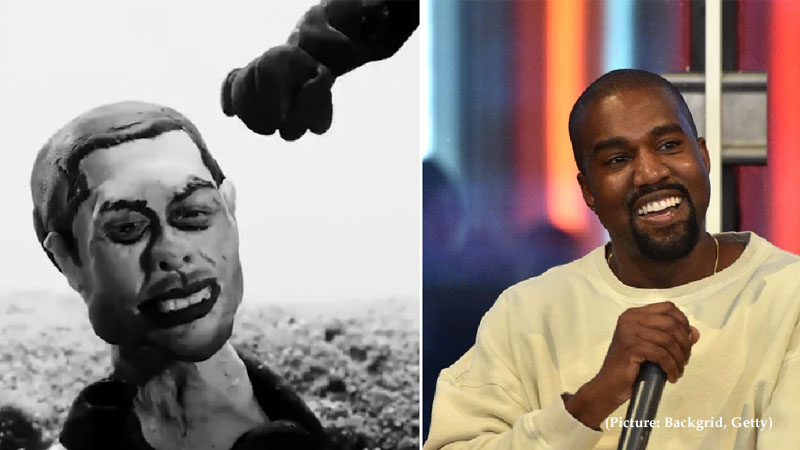 Kanye’s new song ‘Eazy’ is from his upcoming album Donda 2.

Kanye West is being criticized for his new music video for ‘Eazy,’ which shows an animated figure closely resembles Pete Davidson being decapitated and buried alive.

Kanye has taken every opportunity to criticize Pete since he began dating Kanye’s estranged wife Kim Kardashian. Kanye has posted screenshots of private messages between him and Pete, memes about him, and frequently refers to him as “Skete.” Kim, who was recently declared legally single, had to reprimand Kanye because she was concerned for Pete’s safety. Kanye later apologized for his “jarring” Instagram posts, but he’s already back at it.

Kanye released the ‘Eazy’ music video, which features rapper The Game, on Wednesday (March 2). An animated figure modeled in clay appears in the video, which is in clay stop-motion in Kanye’s image can be seen dragging a bound body along the ground.

A bag is then removed from the body’s head, revealing a person who looks exactly like Pete. Kanye then disperses rose seeds across the figure’s face, and roses regrow from Pete’s head. The roses are then loaded onto a pickup truck, similar to the one he sent Kim for Valentine’s Day.

The video ends with a message, which reads: “EVERYONE LIVED HAPPILY EVER AFTER. EXCEPT FOR SKETE, YOU KNOW WHO. JK HE’S FINE.”

Pete is also mentioned in the song lyrics, with Ye rapping: “God saved me from the crash, just so I can beat Pete Davidson’s ass.”

People have criticized the “disturbing” video and believe Kanye has gone too far this time.

can’t make the “Kanye is sick” excuse. so am i, so is Pete Davidson. Pete Davidson and I are on medication to help us, and we take accountability for our actions. don’t demonize mental illness by letting it excuse the way he’s acting.