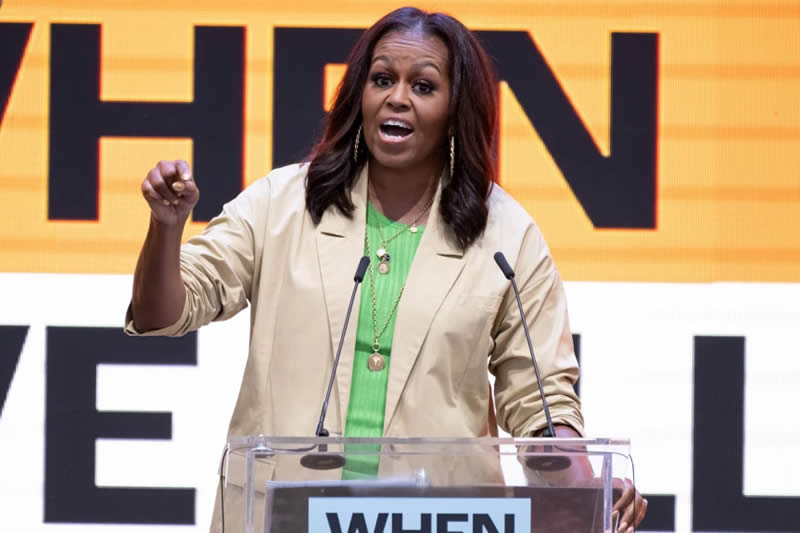 Michelle Obama urged Americans not to tune out of the country’s deadlocked political system on Monday, saying that voting – and enlisting millions of new voters – is the only way to bring about change in a deeply polarized nation, as Washingtonpost reported.

“Protecting and expanding our democracy is the best and only path out of this mess,” the former first lady said during her keynote address at the Los Angeles summit of a national voting organization she helped create.

“Our democracy is fading,” Obama said, citing what she described as abusive gerrymandering practices and a new wave of voting restrictions in states that could suppress voting.

“Sometimes it’s just easier to look away,” Obama said, referring to domestic conflicts and controversies, including disinformation on social media, pervasive gun violence, and the Jan. 6 insurrection at the Capitol.

“No one has the luxury to sit out or stay at home just because you’re not feeling excited enough,” she said. “If you don’t vote, other people will.”

When We All Vote’s inaugural Culture of Democracy Summit came to a close with her speech. The event, which attracted a small gathering, was held at a soccer stadium near downtown Los Angeles.

It happened as the second day of hearings in Washington were held by a House committee examining the Jan. 6 attack on the Capitol.

When We All Vote was established by Obama in 2018 to help in the registering of eligible voters in the United States.

The Democratic Party is facing a difficult political year across the country. The party in power in the White House is usually penalized in midterm elections, and President Joe Biden is unpopular with the majority of Americans.

In 2020, when the presidency was on the line, Obama stated that record numbers of people voted. However, voter turnout was low in California’s primary election last week.

“Every voice counts, and every vote matters,” she said.

It was Obama’s first public appearance in front of a larger audience since the outbreak began, according to organizers. She spoke to When We All Vote in person for the first time in 2018 before the midterm elections.