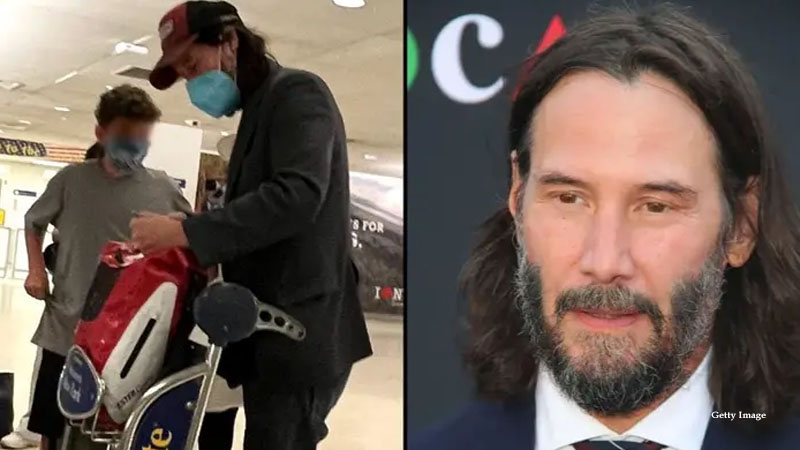 The actor is frequently referred to be the “nicest guy in Hollywood,” and when he interacts with fans, he never seems to let them down.

The Matrix actor answered a tonne of questions from a little fan at an airport while also signing autographs and posing for photos in his most recent touching viral antics.

As per Yahoo, TV producer Andrew Kimmel was on the same flight from London to New York City, and upon touching down in the Big Apple, he watched on in admiration as Reeves calmly responded to a barrage of questions from the eager fan.

Sharing a snap of the star alongside the kid, Andrew tweeted: “A young boy asked for an autograph at baggage & then began to fire off a series of rapid-fire questions. Keanu happily responded to every single one…”

Andrew then took some time to describe the details of the interrogation.

He tweeted: “Kid: Why were you in London?

“Kid: I saw online you were at the Grand Prix (pronouncing the x)

“KR: Yes, the Grand Prix (in a French accent, without correcting him). F1! Race cars!

“Kid: How long are you gonna be in New York?

“Kid: Where are you staying in NY?

Eventually, the kid ran out of steam – at which point Keanu decided to turn the tables.

“By this time the kid was running out of questions, so Keanu started grilling him,” Andrew recalled.

“Why were you in Europe? What galleries did you go to in Paris? What was your favorite?”

Andrew concluded the thread by praising the celebrity and sharing the selfie he simply had to have.

He wrote: “The man could not have been nicer, especially after an international flight.

“I thought I’d share this because the dude is a class act and little moments like this can make such a big difference in people’s lives. We need more Keanus!”