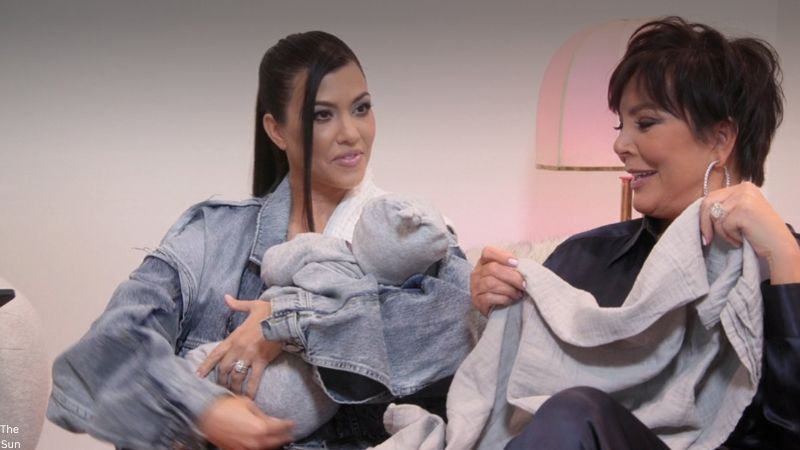 Khloe Kardashian shows off her baby son to her sisters in the last episode of The Kardashians season two, and Kourtney Kardashian makes a surprising revelation that will startle viewers.

Khloe was seated next to her mother Kris Jenner when Kim Kardashian came in to see her infant nephew, followed by Kourtney.

Kris was delighted over the baby, whose name has yet to be announced, before passing it to Kourtney for a cuddle, before commenting in her usual dry humor: “I wish I could breastfeed you,” prompting Khloe to respond light-heartedly: “Oh my god, Kourt, let’s calm down” as Kris said in shock: “Kourtney!”

The scene came at the end of episode ten titled Here’s To Paris which saw Khloe and the family reference the birth of her son via surrogate. At one point Kim says: “What are we going to name him, that’s what I need to know.”

Kris then suggests: “How about Rob Kardashian Thompson,” before adding a joke: “And then we’ll just call him Rob Kardashian.” The momager then says to Khloe directly: “I just want to tell you that I’m really proud of you, you’re the best mom in the entire universe and I’m so proud of how you’ve handled this situation.”

Khloé has kept her family mainly out of the spotlight since receiving her baby through a surrogate in July, and she has yet to publicly or socially share his face or name.

However, episode one of The Kardashians season two focused on Khloe’s second child’s birth, specifically the circumstances surrounding her ex and the child’s father, Tristan Thompson, after word came that he had fathered a child with another woman.

Tristan and the Good American designer had gone on with their plans for their second child before the pair announced their separation in late 2021, and the surrogate became pregnant with an embryo transfer around Thanksgiving.

Continue Reading
You may also like...
Related Topics:Kourtney Kardashian