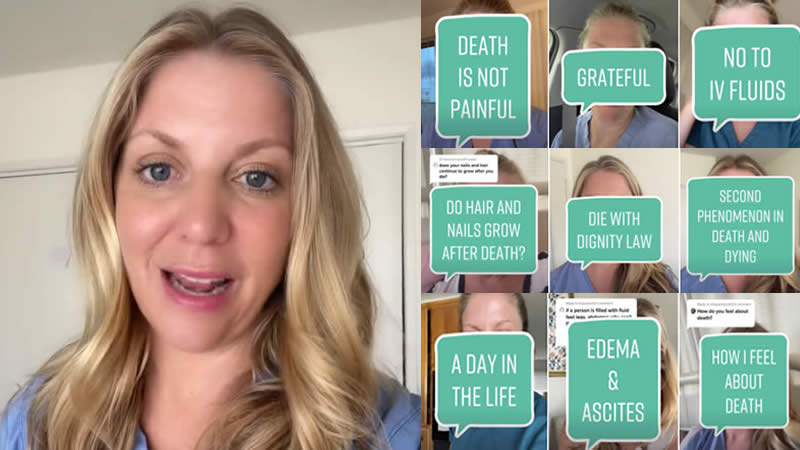 It is difficult, confusing, terrifying, and heartbreaking to witness the death of a loved one. They unrecognizably change in front of our eyes. As a result, our faces are no longer recognized by them. The entire experience can leave us feeling helpless.

Hospice workers do a massive service to humanity by making this process less painful. And they do it with a lot of love and compassion.

In California, Julie works as a hospice nurse. She has helped many patients maintain a quality of life in their final weeks and months before dying quietly in her five years of doing so. She’s also educated many families about what to expect during the transition, in an effort to make it less intimidating. That, according to Julie, is the best part of her job.

Julie decided to share her knowledge on TikTok, where her insights could be seen by a wider audience.

“I knew I had a lot of interesting information about death and dying that most people don’t know about. I want to normalize death by educating people about it. I went home to visit my family, and my tween nieces were on TikTok making dance videos. I later went on TikTok to see their dances. This gave me the idea of starting my own TikTok about death and dying,” she told The Sun.

The concept quickly gained traction. Julie quickly accumulated over 400,000 followers and millions of views on multiple videos. Clearly, she possessed some useful information.

In one of her videos, she explains how many of the morbid aspects of death are actually quite normal. Breathing changes, skin color changes, fevers… all normal. Normal, if a little sloppy. Even the “death rattle,” despite its frightening name, is completely natural because the brain is no longer able to tell the throat to swallow saliva. She refers to it as “Terminal secretions.”

Julie also discusses the “rallying” phenomenon, in which a terminally ill person appears to make a quick recovery—even regaining an appetite and resuming a personality—before succumbing within a few days, if not sooner. She explains that even if no one knows why this occurs, she always informs her patients and their families so they are not caught off guard. I can’t imagine the anguish people who don’t know this goes through.

One person asked, “Does knowing all of this in-depth make death less scary for you?” To which Julie simply replied, “Yes–I’m not scared at all.”

Julie believes that natural death is not uncomfortable. Because many people die as a result of accidents or diseases, we often associate death with pain, but this does not have to be the case. In fact, Julie tells of people seeing angels, including loved ones who have died. They frequently manage to say “I love you” just before death.

Hospice care is, at best, undervalued. At worst, it can be demonized, as many people believe hospice companies make money by killing patients (another notion Julie politely debunks). This is what distinguishes her channel. Julie uses the power of education and empathy to make death—the ultimate unknown—a little less terrifying. It’s something she has to do on a daily basis. But now we can all benefit.