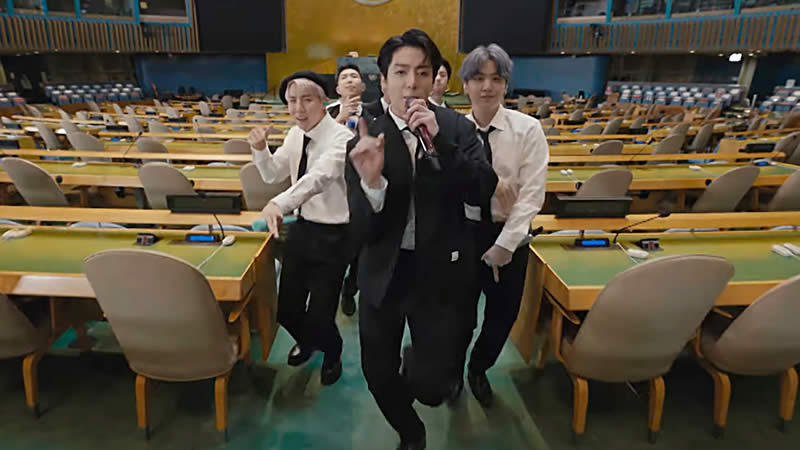 On Monday morning, South Korea’s BTS left it all on the floor – the floor of the United Nations headquarters, to be precise.

The popular K-pop superstars filmed a music video for their hit song “Permission to Dance” at the UN’s huge auditorium, which the UN tweeted and shared on YouTube.

The megastars, who have millions of adoring followers, dance and sing their way through the United Nations’ headquarters in New York City in the video.

BTS showed off the music video during a speech in front of all the Nations at the UN.

“I hope we just don’t consider the future as grim darkness,” said member Jungkook in the UN General Assembly hall.

“We have people concerned for the world and searching for answers. There are still many pages left in the story about us and I feel like we shouldn’t talk like the ending has already been written.”

The event was held as part of the United Nations’ Sustainable Development Goals program, which aims to combat the pandemic while also promoting a more sustainable future.

The seven-member boy band was nominated as envoys by South Korean President Moon Jae-In in July, according to Insider, and BTS was officially sworn in as special presidential envoy for future generations and culture and issued diplomatic passports in a ceremony last week.

“We plan to organize various activities (with BTS) to promote international cooperation in solving global challenges, such as improving the environment, eliminating poverty and inequality, and respecting diversity,” Korea’s Blue House spokeswoman Park Kyung-mi said in a July statement.

The 76th session of the United Nations General Assembly, the main policy-making body of the UN, began last week and will end on September 28 with representatives from 193 member nations in attendance.