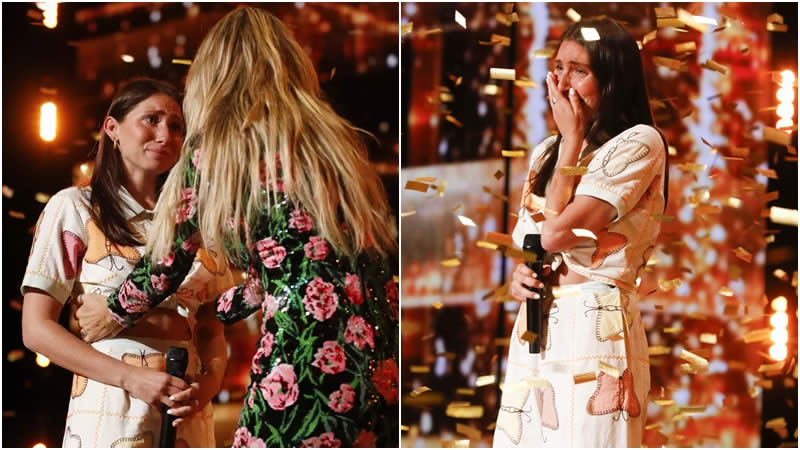 Check out the performer who convinced Heidi Klum to reconsider her AGT golden buzzer decision!

There will be spoilers for America’s Got Talent Season 17 auditions episode airing on June 28.

America’s Got Talent’s audition phase is almost over, and the fifth week of this round saw the fifth and final golden buzzer of Season 17. The first back was given by Terry Crews in the premiere, and Heidi Klum held off on giving hers until a very special performance, which was finally seen by the audience on June 28. Lily Meola’s powerful performance actually convinced Heidi Klum to reconsider her decision to press the golden buzzer this season.

Before she even started singing, Lily Meola had the judges and the audience captivated with her song “Daydream.” She related how everything was going well in her personal and professional life until she received the devastating news that her mother had cancer, forcing her to take full-time care of her until she passed away.

She lost her record deal as a result of her mother’s sickness, but she thought it was “a bit of a blessing” because it provided her more time to be there for her mother. She began her song despite acknowledging that she might find it difficult to sing after losing her mother, who was her “biggest cheerleader,” and it was enough to astound Heidi Klum.

Lily Meola might have managed to keep from crying throughout the song, but most people present surely couldn’t. Her performance was one of the most moving of the evening because of the words, which were already emotionally charged on their own. It’s safe to conclude that her performance was well-liked by all four judges, making it less contentious than an act from the previous show. Heidi Klum opted to break her own rule for Season 17 and press the golden buzzer because she undoubtedly believed that she stood out sufficiently.

Klum stated that Meola just lighted up on stage and that she “fell in love” with her the moment she heard her perform before receiving the delightful surprise of the golden buzzer. The judge then revealed the major news about how Meola changed what she’d intended for Season 17:

For this season, Season 17, I was like, ‘There’s always a lot of singers on the stage, and I want to give someone else a shot,’ but I can’t help it. Because I really really like you, so I’m going to do this. I’m going to push the golden buzzer for you. It’s you!

Heidi Klum has a point when she says that there are a lot of singers on America’s Got Talent, but three of the other four golden buzzer winners of Season 17 were musicians. Although Terry Crews’ selection was of a saxophonist rather than a singer, Howie Mandel pressed the buzzer for the 11-year-old powerhouse singer who put the “amazing” in “Amazing Grace,” while Simon Cowell made a teenage singer’s dream come true by having her travel all the way from Poland to perform.

(Sofia Vergara’s golden buzzer went to a hypnotizing dance group from Lebanon, which you can rewatch streaming with a Peacock subscription.)

Fans won’t see Lily Meola again until the live show’s round of the competition since Heidi Klum guaranteed that she would move ahead, but there are still plenty of talented acts on the way. The latest episodes of America’s Got Talent Season 17 can be seen on NBC on Tuesdays at 8 p.m. ET.

Continue Reading
You may also like...
Related Topics:Americas Got Talent, Heidi Klum