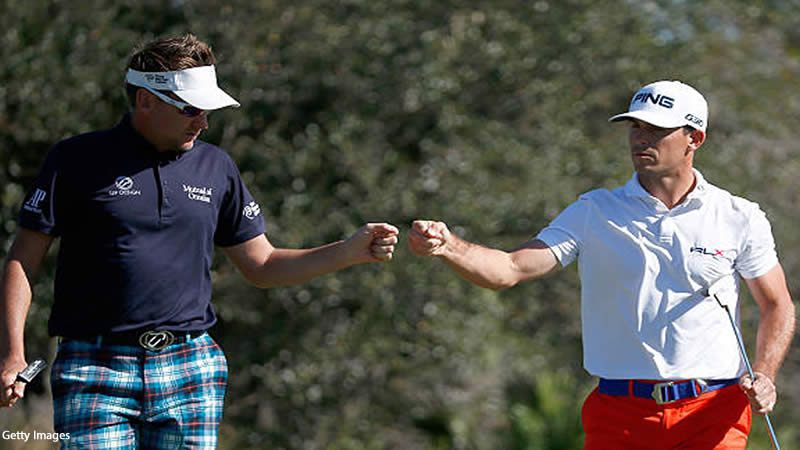 Poulter, one of the more prominent LIV Golf defectors, is among those from the Saudi-backed series competing at the DP World Tour’s flagship event in Surrey.

The decision to allow the LIV players to compete has drawn open condemnation from PGA Tour players, notably Horschel, setting up a potentially explosive showdown on the course.

Horschel and Poulter got into a heated argument on the practice greens, demonstrating how bitter the different factions are even before the event started.

The topic of the conversation is not totally obvious, but it is evident that both players were making hostile hand motions and getting in each other’s faces.

Video of the incident has gone viral, with comments from Horschel about Poulter’s presence in Surrey no doubt offering an explanation for the altercation.

“Even though Lee Westwood and Ian Poulter have been stalwarts for the European Tour (now known as the DP World Tour), I don’t think those guys really should be here,” Horschel told reporters.

“You are here for one reason only and that’s to try to get world ranking points because you don’t have it (on LIV Golf).

“I wouldn’t call Lee Westwood and Ian Poulter hypocrites because they never said they wanted to pay less. The guys that have publicly stated they want to play less, those are the hypocrites.”

Rory McIlroy reveals the truth about the LIV Golf split

Rory McIlroy, one of the most outspoken critics of LIV Golf and defender of the PGA Tour, has also expressed his antipathy towards players he was once close to as part of Europe’s Ryder Cup teams.

Five players of the European Ryder Cup team for 2021, which the United States soundly defeated at Whistling Straits, have joined the contentious Saudi Arabia-backed circuit.

Poulter, Lee Westwood, Sergio Garcia, and Bernd Wiesberger are four of those five players who are in the lineup for this week’s BMW Championship.

As per Yahoo, McIlroy acknowledges that he has grown apart from many of his colleagues who have defected to the breakaway circuit as a result of the complex situation.

“I wouldn’t say I’ve got much of a relationship with them at the minute,” McIlroy said of his former Ryder Cup teammates.

Having declared last month that it would be “hard to stomach” LIV players joining the field at Wentworth, McIlroy was more diplomatic this time around, adding: “They are here. They are playing a golf tournament.

“My opinion is they shouldn’t be here, but again that’s just my opinion.

“If you’re just talking about Ryder Cup, that’s not the future of the Ryder Cup team. They’ve played in probably a combined 25, 30 Ryder Cups, whatever it is.

“The Hojgaards [brothers Rasmus and Nicolai], Bobby Mac [Robert MacIntyre], whoever else is coming up, they are the future of the Ryder Cup team. That’s what we should be thinking about and talking about.”