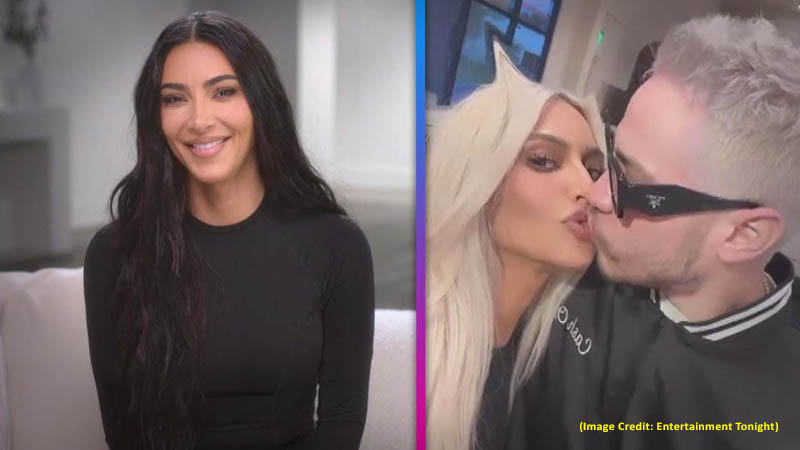 Kim Kardashian revealed she was just after sex with Pete Davidson but ended up falling in love after he put that thang on her!

Pete Davidson, according to Kim Kardashian, has the “best heart” of anyone she’s ever met.

The reality TV star opened up about her new partner, whom she met on the set of “Saturday Night Live” (SNL) last October, in episode eight of Hulu’s “The Kardashians.”

“Pete has got to be literally the best human being I’ve ever met,” she said in a confessional. “The best heart. People always say, ‘Oh, he’s so funny and (the relationship) has to do with how funny he is.’ That’s, like, fourth on my list of why I like him. He always wants the best for people, can handle anything, and always does it with grace. He’s really, really thoughtful and humble and genuine. I would say the best word to describe Pete is genuine.”

Kim went on to describe how she felt a spark when she kissed Pete for the first time as a guest host on “SNL” during an Aladdin-themed sketch, according to Page six.

“I did ‘SNL’ and then when we kissed in-scene, it was just a vibe. I was like, ‘Oh s### maybe I’ve been…maybe I just need to try something different.’ But Pete does not come to my after-party. Everyone was at my after-party. He does not give me the time of day,” the 41-year-old recalled. “A few days later, I called the producer at SNL and I was like, ‘Hey do you have Pete’s number?’

They were like, ‘Yeah,’ and I text him. I wasn’t even thinking like, ‘Oh my God I’m gonna be in a relationship with him.’ I was just thinking…I heard about this BDE (Big Dick Energy). I need to get out there. I need to just, like, jump start my…I was just basically DTF (Down to F###).”

Kim also mentioned that she kept her new relationship a secret for a while to see how serious it was.

“I just feel like I wanted to really make sure and not be like, ‘Oh my God, I met someone and I’m having fun,’ and then just like start talking about it on a show,” she admitted, adding jokingly: “Then if we weren’t talking months later, I’d be an idiot. Or a w**re, either one.”

Kim was declared legally single in March as part of her divorce procedures from husband Kanye West.