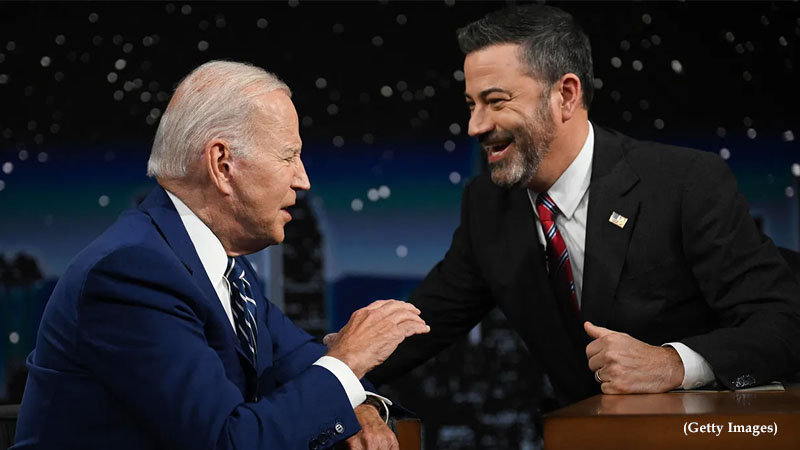 This was how Jimmy Kimmel introduced Joe Biden during his first in-person interview with a late-night host since became the president of the United States, as per The Guardian.

But any hopes that Biden, whose polling results are plunging, had that the comedian would invite him to reveal a lighter side of himself were quickly dashed. There weren’t a lot of laughs that night.

Once the president had sat down, Kimmel asked: “Do you mind if I ask you some serious questions?” He then dived straight in to demand why, after a flurry of mass shootings across America, nothing had been done since Biden entered the White House.

“Well, I think a lot of it’s intimidation by the NRA [National Rifle Association],” the president replied. “Look, this is not your father’s Republican party. This is a Maga party,” – a reference to the former president Donald Trump’s “Make America great again” slogan, which Biden is increasingly using an insult.

Biden said he had always had a “straight relationship” with Mitch McConnell, the Republican minority leader in the Senate. “You know, he’s a guy that when he says something, he means it. I disagree with a lot of what he says, but he means it.”

Kimmel, on the other hand, seemed more willing to interrupt Biden than many political interviewers, allegedly to combat rightwing claims that he would give the president a free ticket. He claimed McConnell had contradicted himself on the issue of confirming supreme court justices in a president’s final year in office.

Biden added: “Look, he’s the leader of a party that’s moved very hard right and so, in order to get anything done, he has a different problem than he did early on before Trump became president.”

Although the Republican Party had shifted to the right, Kimmel noticed that the American people had not because an overwhelming majority favored increased background checks for gun buyers. The host, his voice quivering with emotion, suggested that every senator sit with the mourning families of the 19 schoolchildren killed in Uvalde, Texas, last month.

He interrupted Biden again to ask impatiently: “Can’t you issue an executive order? Trump passed those out like Halloween candy.”

The president noted he had issued some executive orders but said to applause: “I don’t want to emulate Trump’s abuse of the constitution and constitutional authority.”

He said he knew some people felt like “Republicans don’t play it square, why do you play it square? Well, guess what? If we do the same thing they do, our democracy will literally be in jeopardy. Not a joke.”

Kimmel replied: “It’s like you’re playing Monopoly with somebody who won’t pass go or won’t follow any of the rules, and how do you ever make any progress if they’re not following the rules?”

Biden smiled and joked, “You’ve got to send them to jail”, a reference to a punishment in the board game.

High gas prices, baby formula shortages, and a lack of movement on key legislative fronts, such as gun safety and voting rights, are all causing anxiety for Biden. According to a Morning Consult poll released on Wednesday, 58 % of those polled disapprove of Biden’s performance as president, while 39 percent approve.

Biden has also been criticized for giving fewer press interviews than his predecessors: the one he gave on Wednesday was his first since February 10. While Trump avoided late-night tv as president, Barack Obama was a regular presence on the shows during his presidency. Last December, Biden performed a virtual interview with Jimmy Fallon.

Kimmel’s ABC show was recorded in Los Angeles, where Biden is attending the Summit of the Americas, which brings together countries from across the hemisphere this week. Jill Biden, the first lady, was there, as was Biden’s granddaughter Naomi and her fiance.

At one point Kimmel, who in past years has spoken out passionately about healthcare and gun violence, pondered political gridlock and the spread of false information and advised: “I think you need to start yelling at people.”

Biden demurred, saying the US was still suffering from the effects of the coronavirus pandemic but insisted he had “never been more optimistic in my life”.

Kimmel again cut in: “Why are you so optimistic? It makes no sense.”

Biden said he was pinning his hopes on young people, the “best-educated, least prejudiced, most giving generation in American history. This generation is going to change everything. We just have to make sure we don’t give up.”

Later Kimmel sympathized with Biden’s endlessly multiplying crises, including an imminent supreme court decision on abortion rights. “What a terrible job you have,” he said. “I’m glad you’re doing it. But, boy oh boy, does this seem like a bad gig.”