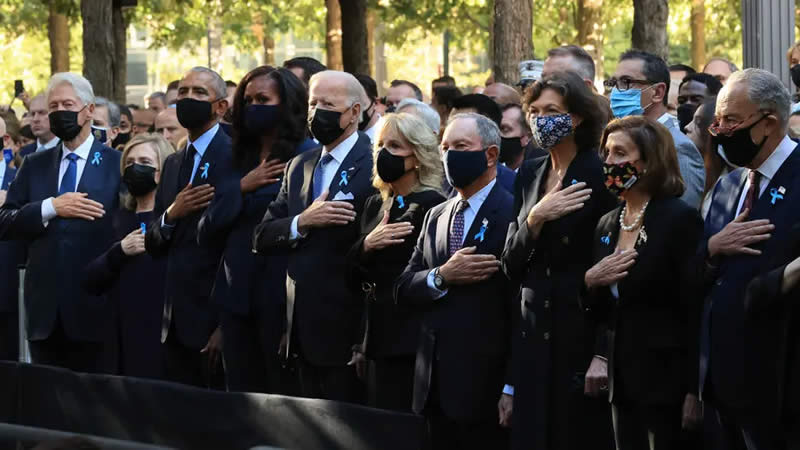 The 9/11 anniversary commemoration at ground zero has begun with a tolling bell and a moment of silence, exactly 20 years after the start of the deadliest terror attack on U.S. soil.

Victims’ relatives read the names of the fallen, a tradition since the first anniversary of the attacks. Bruce Springsteen performed his song “I’ll See You In My Dreams” while accompanying himself on guitar and harmonica.

Former President George W. Bush, the nation’s leader on 9/11, is due at the Pennsylvania memorial. The only other post-9/11 U.S. president, Donald Trump, is planning to be in New York, in addition to providing commentary at a boxing match in Florida in the evening.

Other observances — from a wreath-laying in Portland, Maine, to a fire engine parade in Guam — are planned across a country now full of 9/11 plaques, statues, and commemorative gardens.

Twenty years ago, the 11th of September dawned as just a date. By midnight, it was 9/11, the staggering starting point for a new era of terror, war, politics, patriotism and tragedy.

The U.S. marks the milestone anniversary Saturday under the pall of a pandemic and in the shadow of a frantic withdrawal from Afghanistan, which fell to the same militant rulers who gave safe haven to the plotters of the 2001 attacks.

“It’s hard because you hoped that this would just be a different time and a different world. But sometimes history starts to repeat itself and not in the best of ways,” said Thea Trinidad, who lost her father in the attacks and has signed up to read victims’ names at the ceremony at ground zero in New York.

In a video released Friday night, Biden mourned the ongoing losses of 9/11.

“Children have grown up without parents, and parents have suffered without children,” he said. But the president also spotlighted what he called the “central lesson” of Sept. 11: “that at our most vulnerable … unity is our greatest strength.”

Obama has lauded the heroes of 9/11 — and of the years since — in a message to mark the 20th anniversary.

“One thing that became clear on 9/11 — and has been clear ever since — is that America has always been home to heroes who run towards danger in order to do what is right,” said Obama, who was U.S. President from 2009 to 2017.

He said the enduring image for him and his wife Michelle of that day was not the wreckage and destruction but the people. He singled out firefighters who ran up the stairs as others were running down, passengers who stormed the cockpit of their plane and volunteers who came forward across the country in the days that followed.