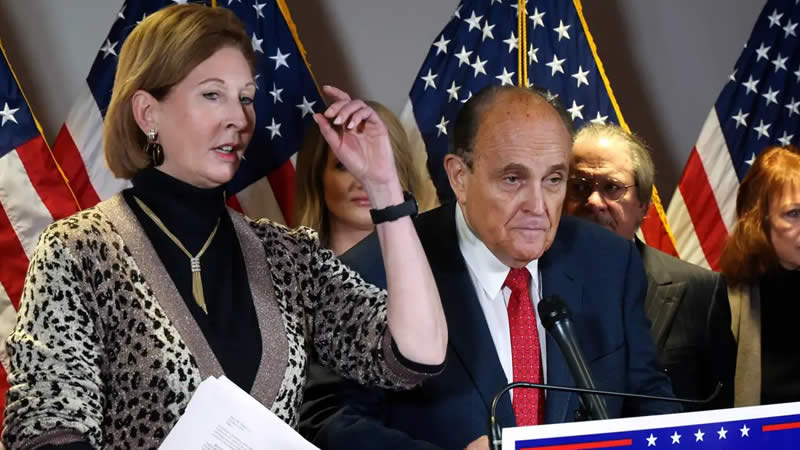 In Michigan, a federal judge has ordered sanctions against former Trump attorney Sidney Powell, attorney Lin Wood, and several other lawyers who filed a lawsuit attempting to overturn President Joe Biden’s victory in the state’s 2020 election.
Judge Linda Parker branded the lawsuit as a “historic and profound abuse of the judicial process” in her judgment.

In a scathing 110-page filing Parker wrote, “It is one thing to take on the charge of vindicating rights associated with an allegedly fraudulent election,” “It is another to take on the charge of deceiving a federal court and the American people into believing that rights were infringed, without regard to whether any laws or rights were in fact violated. This is what happened here.”

Parker ordered the nine attorneys involved in the lawsuit to pay all legal fees incurred by the state of Michigan and the attorneys for the city of Detroit, as well as mandated them to take legal education courses.

She also referred all nine to the Michigan Attorney Grievance Commission for investigation, which might result in suspension or disbarment.

Attorneys for Powell and the other lawyers in the election lawsuit did not reply to ABC News‘ request for comment right away.

Parker noted in her judgment that attorneys must take an oath “to uphold and honor our legal system,” which she charged Powell, Wood, and the others with flagrantly breaking with their baseless and conspiracy-tinged challenge.
Parker wrote, “Despite the haze of confusion, commotion, and chaos counsel intentionally attempted to create by filing this lawsuit, one thing is perfectly clear: Plaintiffs’ attorneys have scorned their oath, flouted the rules, and attempted to undermine the integrity of the judiciary along the way.”

“It is not acceptable to support a lawsuit with opinions, which counsel herself claims no reasonable person would accept as fact and which were ‘inexact,’ ‘exaggerate[d],’ and ‘hyperbole,’ Parker said. “Nor is it acceptable to use the federal judiciary as a political forum to satisfy one’s political agenda. Such behavior by an attorney in a court of law has consequences.”

Parker also criticized the attorneys’ statements that they would still file the same complaints even after the events of Jan. 6, when a mob of Trump supporters stormed the US Capitol, incited by false accusations of a “stolen” election.

“An attorney who willingly continues to assert claims doomed to fail, and which have incited violence before, must be deemed to be acting with an improper motive,” said Parker.