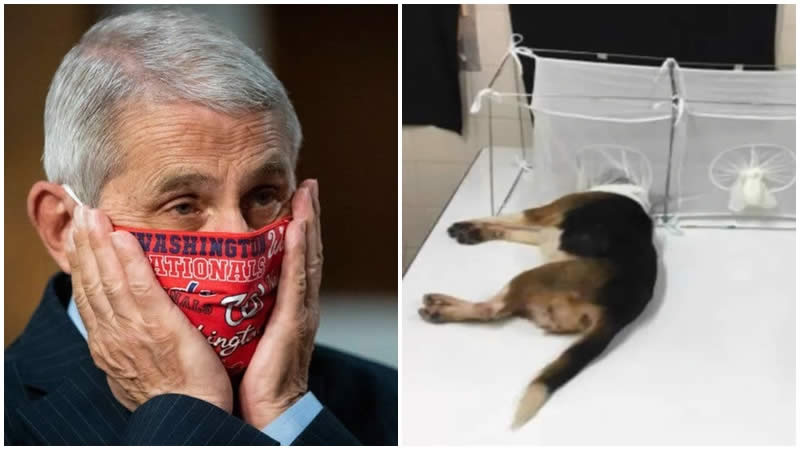 DR. Anthony Fauci has come under criticism for allegedly supporting research in which beagle puppies were kept alive in cages with ravenous sandflies.

The director of the National Institute of Allergy and Infectious Diseases has been accused of sponsoring a project in which beagles were infected with disease-causing parasites in order to test an experimental medicine, according to the non-profit White Coat Waste Project.

As per the report of The Hill, a bipartisan group of 24 House Representatives has written a letter asking that Fauci responds to the nonprofit’s assertions.

According to the organization, up to 44 beagle puppies were used in the inhumane experiment in a Tunisian laboratory.

Some of the dogs’ vocal cords were allegedly removed in order to silence their barking.

“Our investigators show that Fauci’s NIH division shipped part of a $375,800 grant to a lab in Tunisia to drug beagles and lock their heads in mesh cages filled with hungry sandflies so that the insects could eat them alive,” White Coat Waste told The Hill.

“They also locked beagles alone in cages in the desert overnight for nine consecutive nights to use them as bait to attract infectious sand flies,” they added.

According to records obtained by the non-profit, the NIAID spent $1.68 million of taxpayer money on these experiments.

Some Democrats, including Representatives Cindy Axne of Iowa and Jimmy Gomez of California, signed the letter.
It was, however, primarily signed by Republican lawmakers, including South Carolina Rep Nancy Mace, who is leading the effort.

“The dogs were all between six and eight months old. The commissioned tests involved injecting and force-feeding the puppies an experimental drug for several weeks, before killing and dissecting them,” said the lawmakers’ letter, according to Newsweek.

“Of particular concern is the fact that the invoice to NIAID included a line item for ‘cordectomy.’ As you are likely aware, a cordectomy, also known as ‘devocalization,’ involves slitting a dog’s vocal cords in order to prevent them from barking, howling, or crying.”

“This cruel procedure – which is opposed with rare exceptions by the American Veterinary Medical Association, the American Animal Hospital Association, and others – seems to have been performed so that experimenters would not have to listen to the pained cries of the beagle puppies. This is a reprehensible misuse of taxpayer funds.”

As per The-Sun, the lawmakers want to know how many drug tests have been performed on canines since January 2018, as well as how much they cost.

They also want to know why these studies were done when the FDA doesn’t require that new medications be tested on dogs.

Fauci, who also serves as President Joe Biden’s main medical adviser, has previously been accused of lying to the American public after records appeared to contradict his claims that his organization did not sponsor coronavirus research in a Wuhan, China, lab.