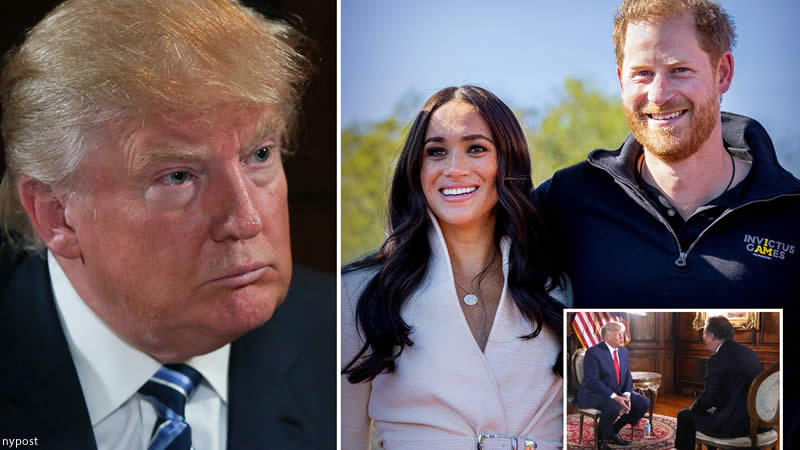 Piers Morgan’s blockbuster interview with Donald Trump will air tonight in the UK, and the former president spent a portion of their chat laying into certain royals

While Trump was polite to the Queen, he was less favorable to her grandson Prince Harry and his wife, Meghan Markle.

Trump called Harry ‘whipped,’ saying he was being ‘led around by his nose,’ and demanded that he be deprived of his royal title.

“Harry is whipped. [He] is whipped like no person I think I’ve ever seen,” the former POTUS said.

Elsewhere in the interview, segments of which have been published by The Sun, he elaborated: “I’m not a fan of Meghan, and I wasn’t from the beginning. Poor Harry is being led around by his nose. And I think he’s an embarrassment.”

Trump also insinuated that Harry and Meghan’s relationship will be short-lived, telling Morgan: “I want to know what’s going to happen when Harry decides he’s had enough of being bossed around. Or maybe when she decides that she likes some other guy better.”

He added: “It’ll end and it’ll end badly. And I wonder if Harry’s gonna go back on his hands and knees back into the beautiful city of London and say, please. You know, I think Harry has been led down a path.”

Asked whether he would strip Harry and Megan of their titles if he were the Queen, Trump responded: “I would. Her loyalty is to the country. And I think that he has been so disrespectful to the country, and it’s a great country.”

Morgan’s new talk show, Piers Morgan Uncensored, was filming the interview, which Trump is reported to have walked out of.

However, Trump released a statement earlier this month accusing Morgan of attempting to ‘unlawfully and deceptively edit his long and tedious interview’ and said it was ‘made to look like he walked out.

In a statement released 20 April, he said: “He wanted to make it look like I walked out on the interview when my time limit of 20 minutes went over by an hour.

“The good news is that the interview was taped by us as a means of keeping him honest.

“Hopefully they will now be doing some big changes to their final product.

“It just shows, however, what I have to deal with in the Fake News Media. He went out of his way to deceptively editing an interview and got caught. That is a big story isn’t it?”