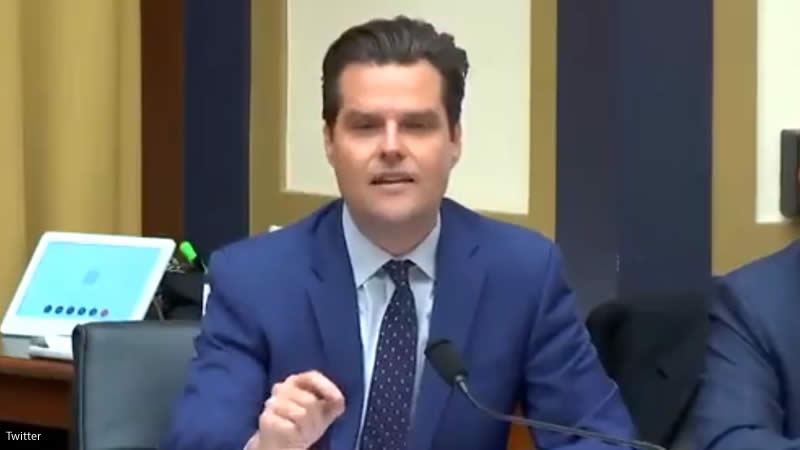 Has the FBI assessed whether Hunter Biden’s laptop could be a point of vulnerability, allowing America’s enemies to hurt our country? … ‘

During a House Judiciary Committee meeting on Tuesday, Rep. Matt Gaetz, R-Fla., placed the contents of Hunter Biden’s “laptop from hell” into the Congressional record.

Moments ago, I successfully entered the hard drive of Hunter Biden’s laptop into the Congressional Record.

“After consultation with majority staff I seek unanimous consent to enter into the record of this committee the contents from, files from, and copies from the Hunter Biden laptop,” Gaetz said, according to the New York Post.

However, Nadler relented after consulting with his staff.

During FBI Assistant Director for the Cyber Division Bryan Vorndran’s testimony, Gaetz entered the laptop into the record.

Gaetz inquired of Vorndran about the whereabouts of Biden’s laptop, which has been in the FBI’s possession since it was seized from a Wilmington, Delaware, computer repair shop owned named John Paul Mac Isaac.

Vorndran stated that he did not know.

“That is astonishing to me,” Gaetz replied. “Has the FBI assessed whether Hunter Biden’s laptop could be a point of vulnerability, allowing America’s enemies to hurt our country?”

“Sir, it’s not in the purview of my investigative responsibilities,” Vorndran responded.

Gaetz also introduced the “Spook Who Cried Wolf Resolution” on Tuesday, which would strip security clearances from 51 former national security officials who signed Oct. 19, 2020, open letter claiming that the release of information from Biden’s laptop had “all the classic earmarks of a Russian disinformation operation.”

“Resolved, that it is the sense of the House of Representatives that the 51 signatories of the letter who publicly and falsely decried Hunter Biden’s laptop to be Russian disinformation should be barred from holding any level of security clearances indefinitely,” the resolution said.

The New York Post asked all 51 signatories of the letters to apologize after the New York Times finally allowed that the material from the laptop had been “authenticated” two weeks ago.

No one expressed regret.