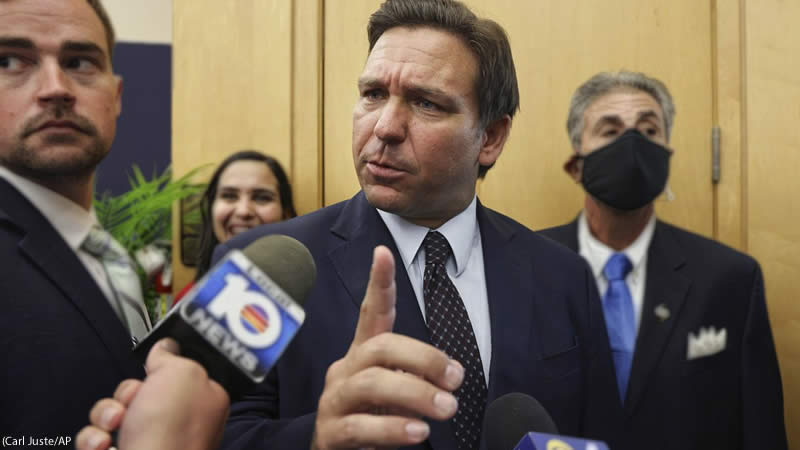 One law professor said if the bill was a direct result of Disney’s political speech, it’s ‘highly likely to be unconstitutional.’

The proposals went from draft to law in four days.

It was also legally questionable, according to experts.

According to The Atlantic, the more high-profile of the two Disney bills removes the company’s Reedy Creek Improvement District, which has had wide self-governance powers over its Disney World property for more than 50 years, equivalent to being its own county. On June 1, 2023, the new law removes that special district, as well as five others.

DeSantis took a victory lap at the bill signing in Hialeah Gardens on Friday, referencing Disney’s resistance to the previous education bill.

“You’re a corporation based in Burbank, Calif., and you’re gonna marshal your economic might to attack the parents of my state?” he said. “We view that as a provocation, and we’re going to fight back against that.”

But some legal experts say the move could run afoul of the First Amendment.

“Disney obviously has no right to have a business improvement district, but to take away something like that based on speech, that strikes me as highly likely to be unconstitutional,” said Daniel Greenwood, a law professor at Hofstra
University in New York specializes in corporate speech.

The speed with which the bills were approved is part of a larger pattern of DeSantis getting his way with the Republican-controlled Legislature, which has transparency advocates concerned about Florida’s checks and balances system.

The famous Citizens United Supreme Court decision in 2010 established that corporations enjoy virtually the same First Amendment rights as individual Americans. Because political contributions are a kind of free speech, the court concluded that firms could make unlimited campaign contributions in that case.

Disney is likely to use the First Amendment in many cases, according to Adam Winkler, a University of California Los Angeles professor who has written a book on corporate civil rights.

“The Supreme Court has said the government cannot take special benefits away for improper reasons,” he said, adding that this new law would be like prohibiting people from receiving public assistance checks if they dislike Donald Trump.
Walt Disney World did not respond to two emails inquiring about the possibility of a suit.

In response to an email asking about potential legal issues, DeSantis spokesperson Christina Pushaw said: “The assertion that a single corporation has a First Amendment right to its own autonomous government is simply absurd.”

“Gov. DeSantis has consistently supported a more level playing field for all businesses in Florida,” she added. “It is not ‘retaliatory’ to pass legislation that gets rid of carve-outs and promotes a fairer environment for all companies to do business.”

Republican lawmakers have said that jeopardizing Disney’s special district is not intended to punish the firm, but rather to eliminate a broad special privilege that should never have existed in the first place.

Rep. Randy Fine, R-Palm Bay, who sponsored the House version of the special districts law, told CNBC on Thursday that Disney’s district was “crony capitalism” that went against the free market.

“When Disney kicked the hornet’s nest several weeks ago, we started looking at special districts,” he said. “This is something that makes sense to do in general but because of the way Disney has behaved, there’s now the political will to do it.”

Disney announced a freeze on all of its political contributions in Florida as part of its opposition to the education bill.

The new law would abolish five additional special districts founded before 1968, in addition to Reedy Creek, which has more authority than the typical special district. According to a state list, over 1,800 others would be unaffected, including those used by The Villages, a retirement community, and a Republican voting mecca.

If the district is officially dissolved, taxpayers in the Orlando area could be saddled with hundreds of millions of dollars in debt owed to Disney. DeSantis, on the other hand, said in a statement on Friday that taxpayers should not expect any increases and that his administration will propose “additional legislation.”

Looking ‘under the hood’ of corporations

At a Florida Chamber gathering late last year, DeSantis threatened some of the state’s most powerful companies that if they showed “corporate weakness,” he would “look under the hood” of their activities.

DeSantis has proven on several occasions that he can use political clout to get his agenda passed.

The Republican governor, who is seeking reelection and is widely expected to run for president in 2024, backed an effort to remove certain school districts from consideration for state funds if they had previously adopted mask mandates that were in violation of state policy.

He had a public spat with Republican Senate President Wilton Simpson over an Everglades bill, and although being asked, he has so far declined to endorse Simpson’s quest for agriculture commissioner by reporters while Simpson stood next to him.

With the state’s once-in-a-decade redistricting, DeSantis stepped in to propose his own design and then vetoed the Legislature’s map after it didn’t fit his model, claiming that the Legislature’s plan wrongly prioritized race over the 14th Amendment’s equal protection. Republican lawmakers eventually handed map-drawing authority to his office.

During a special session on Thursday, legislators approved DeSantis’ proposed plan, despite protests from Black Democrats. It was signed by DeSantis on Friday.

“The Legislature (historically) took their functions and their ‘don’t tread on our responsibility’ pretty damn seriously and in this session, at least, it looked like the executive branch reigned supreme,” said Screven Watson, a longtime Tallahassee lobbyist, and Democratic consultant.

Both the targeting of Disney and the quick process used to approve the bills are causes for worry, according to Pamela Marsh, executive director of the First Amendment Foundation, a nonprofit that advocates for transparency in state government. Members of the group include the Tampa Bay Times and the Miami Herald.

“When the three branches of government aren’t separate, that’s a constitutional breach,” Marsh added. “As someone who studies the Constitution, I think it’s really being assaulted from a lot of angles.”