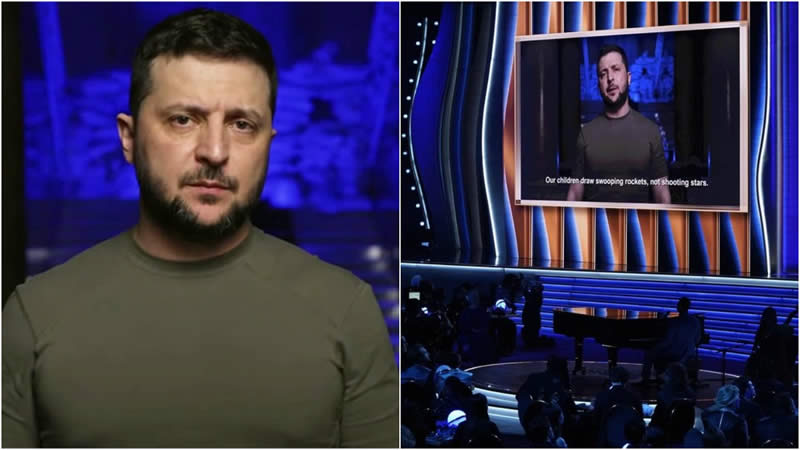 The 44-year-old Ukrainian president – whose country is agonizing an existing military seizure launched by Russian President Vladimir Putin at the end of February – seemed in a pre-recorded video message in a bunker where he professed that music is the “opposite” of war.

In the pre-recorded video voiced at the live event, he said: “The war. What is more opposite of music? The silence of ruined cities killed people. Our children draw swooping rockets, not shooting stars. Over 400 children have been injured and 153 children died, and we will never see them drawing.

Our parents are happy to wake up in the morning in bomb shelters but alive. Our loved ones don’t know if we will be together again. The war doesn’t let us choose who survives and who stays in eternal silence.

Our musicians wear body armor instead of tuxedos. They sing to the wounded in hospitals, even to those who can’t hear them. But the music will break through anyway.”

In the caption clip, the politician – who was inaugurating an accomplishment of ‘Free’ by John Legend – went on too long for viewers to “fill” the “dead silence” his country faces with music as he “dreams” that one day the dispute will be over and his country will be “free.”

He added: “We defend our freedom. To live. To love. To sound. On our land, we are fighting Russia which brings horrible silence with its bombs. The dead silence. Fill the silence with your music! Fill it today to tell our story. Tell the truth about his war on your social networks, on TV. Support us in any way you can.

Any — but not silence. And then peace will come. To all our cities the war is destroying. Chernihiv, Kharkiv, Volnovakha, Mariupol, and others.

They are legends already. But I have a dream of living. And free. Free like you on the Grammy stage.”