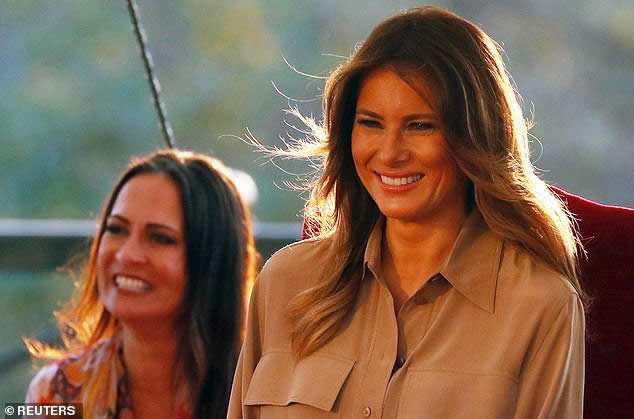 Stephanie Grisham was surprised when Melania Trump stopped speaking to her, following her resignation, she told Insider in a Friday afternoon interview, saying she “naively” thought they were friends.

Grisham became one of the selected staffers and confidants in Melania’s inner circle. She had great relations with Melania. She resigned over the January 6 insurrection for good from the White House and is now out with a new tell-all memoir, “I’ll Take Your Questions Now”.

“It wasn’t easy for me after I resigned on January 6th because she completely cut me off. And, I truly, even in my resignation letter, I told her, I am doing what you’ve taught me to do, and that is to do what you always think is right,” Grisham told Insider. “And I said it was an honour to work for you. So sure, to be cut off from her like that, when I naively thought we were friends, clearly we were not, so that, I think, is my bad.”

Melania not only cut Grisham off but has fully demonised her former right-hand woman as a liar and opportunist looking to profit on her White House experience by disclosing unfavourable anecdotes about the Trumps.

Melania’s office called the book “an attempt to redeem herself after a poor performance as press secretary, failed personal relationships, and unprofessional behaviour in the White House,” saying that “through mistruth and betrayal, she seeks to gain relevance and money at the expense of Mrs Trump.”

Melania said in a statement released the day before the publication of Grisham’s book, “Grisham is desperately trying to rehabilitate her tarnished reputation by manipulating and distorting the truth about Mrs Trump,” calling her “a deceitful and troubled individual who doesn’t deserve anyone’s trust.”

Grisham told Insider about the attacks on her credibility and personal life, “Of course it doesn’t feel good, and I anticipated it. But anticipating something and then having it happen are two different things.”

Grisham has stated that she has hard evidence, including text messages, to prove she is speaking the truth. In response to Melania Trump’s claim that she is out for a payday, Grisham said she “can’t put a price tag” on the emotional toll of writing the book and dealing with personal assaults and smears over it.

“When it came to Mrs Trump, I did always think of her as a pretty honest person,” she said. “And a lot of the personal smear campaigns that even she has put out or has supported, I know she knows are false and I even have text messages to show us talking about these things. Like I know, she knows that these things are false.”