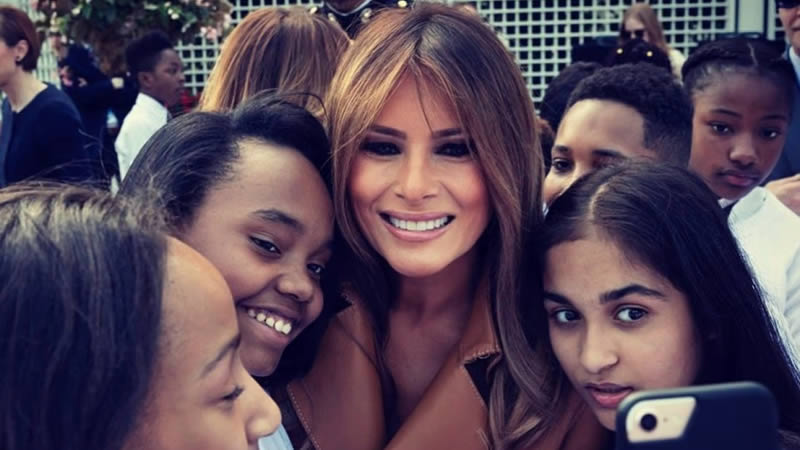 • She has grandparent responsibilities to her stepchildren Ivanka, Eric, and Donald Jr., but she’s also been involved in children’s causes since she and Donald left the White House.

• Most recently, she launched an NFT platform to support kids and plans to teach foster children computer science skills through her Be Best initiative.

It’s been nearly two years since Donald and Melania Trump left the White House, and while the former US president continues to make political headlines, the former first lady has also been in the spotlight due to rumors of a divorce and her mysterious absence from her husband’s birthday celebrations. Throughout this time, though, she has remained active in a variety of children’s causes.

Melania Trump is promoting the progress, encouragement, and future of kids while also raising her own son, Barron.
Melania is an advocate for children’s literacy

Melania has grandparent responsibilities, as her stepchildren Ivanka, Eric, and Donald Jr, from Donald’s first marriage to Ivana, are all parents. She is, nevertheless, more inclined to spend time reading with underprivileged children.

“Instilling a love of reading from a young age fosters lifelong learning,” Melania wrote on Instagram. In response to Dr. Ben Carson donating copies of his book Why America Matters via her Be Best initiative, she added: “Thank you for the wonderful Christmas gift that you have sent to foster care children!”

Melania also wants to ensure that children have a good start in adulthood too. According to New York Post, she unveiled a new

“>NFT venture in December, selling art to “support my ongoing commitment to children.”

Melania said in a statement that, through her Be Best initiative and her new technology-based platform, “we will provide children computer science skills, including programming and software development, to thrive after they age out of the foster community”.

She even does kids’ birthdays

According to The Guardian, the former first lady and her husband Donald offer a variety of packages for paid public appearances, which includes showing up for young fans. Melania is open to leaving individualized remarks for children’s birthdays, Girl Scout gold and Eagle Scout accomplishments, graduations, and new baby welcomes.

During her tenure in the White House with Barron and Donald, they participated in exciting activities like pardoning turkeys, and while other celebrities frequently volunteer at food banks, Melania chose to spend Thanksgiving with youngsters in foster care in the United States in 2021.

During a visit to 4 Kids in Palm Beach, Florida, the mother-of-one shared photos of herself coloring and playing with young children on Instagram. “Thanksgiving is about gratitude, reflection, and giving back to our communities,” she wrote on Instagram with photos that showcased her maternal side. She continued her work with very ill youngsters at the National Institutes of Health for Valentine’s Day in February.

Melania encourages high school kids to never give up

As per Scmp, Melania Trump has proven to be an inspiration to high school students as the mother of a teenage son. She and Donald took the time in November to answer to pupils from Kansas who had written to them as part of a school project requiring them to write a handwritten letter to someone they admired.

The previous White House inhabitants, according to Fox News, responded with words of encouragement, telling them to “enjoy learning, and never, ever give up” as well as reminding them that the “nation’s bright future relies on your leadership, commitment, and character”.