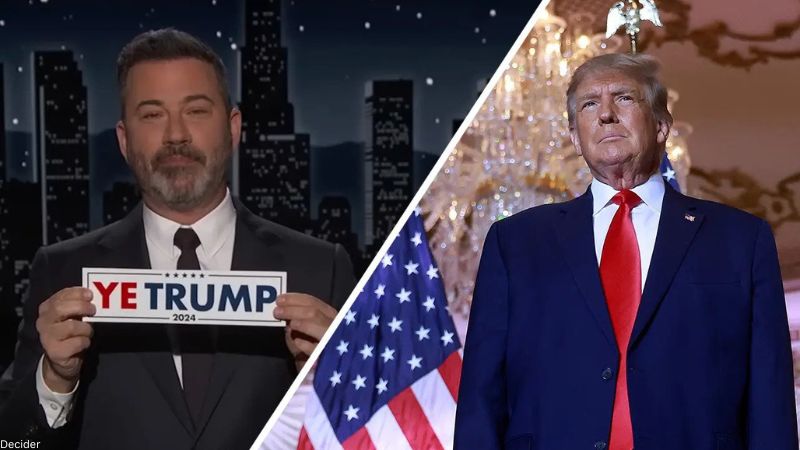 Of course, you’ve heard about Donald Trump‘s recent dinner with Kanye West and West’s friend, white nationalist Nick Fuentes, during which Ye allegedly asked Trump to run as his vice presidential candidate in 2024. Jimmy Kimmel thought the whole thing was funny and roasted it during his monologue on Monday’s episode of “Jimmy Kimmel Live.”

“Our festively Yam-colored former President had a busy holiday week. A meeting of the mindless at Mar-A-Lago,” Kimmel said. “We learned on Friday that Trump had dinner with Kanye West, and a White Supremacist slash Holocaust denier named Nick Fuentes. And you know this one was bad because Trump posted not one, but three messages on his imaginary social media site trying to distance himself.”

Kimmel then read out all three of Trump’s comments, the last of which was strangely phrased but claimed that Trump had no knowledge he was having dinner with anybody other than Kanye.

“Only Donald Trump would defend himself by saying, ‘I was only planning to eat with one anti-Semite, okay,’” Kimmel joked. Kimmel then brought up one of the strangest allegations to emerge since the dinner was made public: West’s claim that he urged Trump to run as his vice presidential running mate in 2024, which West said enraged Trump so much that he started criticizing West’s ex-wife, Kim Kardashian.

“I would have loved to be a fly on the ketchup-covered walls for that conversation. That moment, when Kanye asked Trump to be his running mate. No amount of money I wouldn’t give to have seen that. And you know, it’s terrifying to think of Trump as president again. But it’s amazing to think of him as vice president. I mean, imagine him nodding and clapping during the stadium. Politely sitting down and standing up. We’d get to watch him die inside every minute of every day,” Kimmel said.

Kimmel then unveiled a fake bumper sticker for this terribly unlikely political coupling, which read “Ye Trump,” as in “yay Trump.”

Someone print these up, and everyone put these on your cars!”

Kimmel also mentioned West’s claim that when speaking with Fuentes, a well-known extremist conservative and white nationalist, Trump told West, “he gets me.”

“You’re not that hard to get,” Kimmel counted. “We all get you. You’re like HPV, okay. It’s only a matter of time.”

“But just to recap, Kanye West went to Mar-a-Lago to have dinner with Donald Trump. Which sounds like the beginning of a joke. And as his plus one, he brought up a well-known white supremacist Holocaust denier, and Trump claims he didn’t know about that. And if he didn’t know, which is worse? Having the guy over for dinner? Or having no idea you’re letting a racist rando into a house that was, until very recently, full of unguarded top-secret documents?” Kimmel continued.

Kimmel also mentioned Fuentes, whom he described as “a 24-year-old virgin, who was one of those very good people on both sides in – that wasn’t a joke – Charlottesville.” He’s one of these “great replacement” people who claim Jews and other minorities are trying to eliminate White culture. He’s an election denier, an anti-vaxxer, and everything else bad. “Look. You know it’s a bad sign when Kanye West is only the third most controversial person at your dinner table, okay,” Kimmel joked about that.

Kimmel ended this segment of his monologue by noting that Kanye is now also a public supporter of Alex Jones. “What is Kanye [doing]? Somehow he’s mixed up with all the worst people in the world. He’s like The Joker in ‘The Lego Batman Movie,’ trying to free all the supervillains from the Phantom Zone. I think the lesson is – if Kanye asks to come over for dinner, say no.”