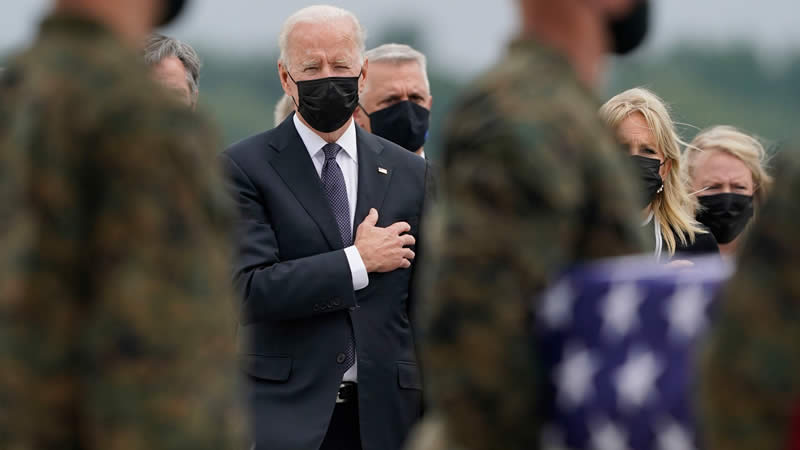 The remains of 13 US soldiers killed in an attack at Kabul airport last week are being returned to the US from Afghanistan.

President Joe Biden has met with the families of the 13 US soldiers who were killed in an attack at Kabul airport last week, as the remains of the fallen army personnel are returned to the United States from Afghanistan.

Biden and First Lady Jill Biden attended the “dignified transfer” of the fallen soldiers at Dover Air Force Base in Delaware on Sunday, a military ritual of receiving the remains of those killed in foreign combat.

The president and his wife watched as flag-draped cases carrying 11 service members’ remains were loaded into vans. The sounds of crying could be heard and one woman collapsed and was taken to an ambulance.

The remains of two more US military personnel will be transferred in an event not covered by media at the request of their families.

At their deaths, the 13 young soldiers were on the ground for the US withdrawal from its longest war, helping to evacuate Americans and Afghans who had helped the US in its mission in Afghanistan and are now fleeing following the Taliban’s takeover of the country.

“The 13 service members that we lost were heroes who made the ultimate sacrifice in service of our highest American ideals and while saving the lives of others,” Biden said in a statement on Saturday.

At least 175 people, including dozens of Afghan civilians and US soldiers, were killed in the bombing at Kabul airport on Thursday, which was claimed by the Islamic State in Khorasan Province, ISKP (ISIS-K), an ISIL (ISIS) affiliate.

President Biden warned on Saturday that his commanders had told him that another “attack is highly likely in the next 24-36 hours” as US military personnel work to complete Washington’s withdrawal from Afghanistan by an August 31 deadline.

Meanwhile, US Secretary of State Antony Blinken said about 300 US citizens still in Afghanistan have said they want to leave the country.