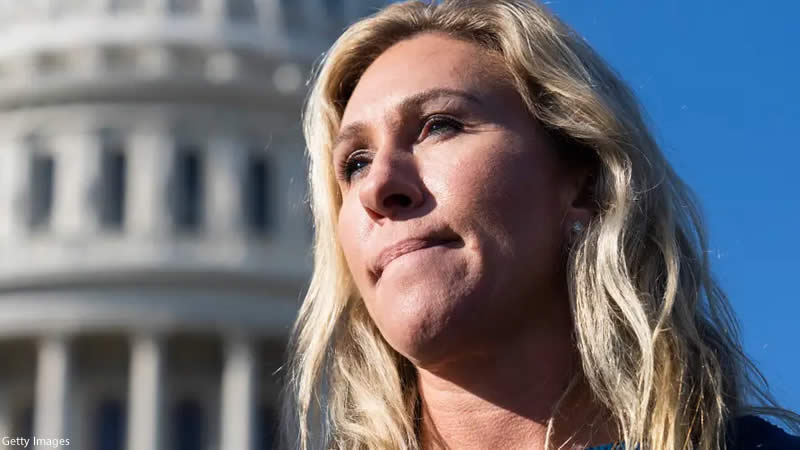 In a January 2021 text, Greene told Trump’s chief of staff that some lawmakers wanted the president to declare martial law. During court testimony, she said she didn’t recall that.

Rep. Marjorie Taylor Greene’s new text messages about the 2020 election point to recent court evidence in which the Georgia Republican said she had no role in efforts to keep former President Donald Trump in office, as per NBC News.

Greene said she couldn’t recall advocating for martial action to prevent President Joe Biden from taking office during a hearing on Friday. Greene discussed the concept with then-White House chief of staff Mark Meadows, according to a new batch of text messages obtained by CNN.

The text messages, according to Ron Fein, who is organizing a legal challenge to Greene’s candidacy in Georgia amid charges she helped organize the Jan. 6 riot, damage her credibility and testimony in the case.

“Marjorie Taylor Greene testified under oath that she could not remember telling Trump or his chief of staff to declare martial law to try to keep Trump in power, but her own texts reveal that she did exactly that,” Fein said in a statement.

“Anyone who ‘can’t remember whether they urged the White House Chief of Staff to talk to the President of the United States about declaring martial law can’t be trusted when they claim they ‘can’t remember their own engagement in insurrection,” he added.

Greene’s lawyer and the office did not respond to requests for comment right away.

Greene warned Meadows in a text message on Jan. 17, 2021, that some GOP members were advising Trump to declare martial law.

“In our private chat with only Members, several are saying the only way to save our Republic is for Trump to call for Marshall law. I don’t know about those things. I just wanted you to tell him. They stole this election. We all know. They will destroy our country next. Please tell him to declassify as much as possible so we can go after Biden and anyone else!” she wrote.

NBC News has not been able to independently confirm all of the text messages, which appear to depict attempts by the Trump White House and its allies to reverse the 2020 presidential election results that go well beyond what was previously known.

During Friday’s hearing, Greene testified under oath for nearly four hours and was questioned if she had called for martial law prior to Biden’s inauguration.

“I don’t recall. I don’t recall,” Greene said when pressed about conversations and social media posts surrounding the election and Jan. 6.

Last month, Free Speech for People, Fein’s election and campaign finance reform nonprofit, filed a lawsuit on behalf of a group of Georgia voters seeking to have Greene removed from the ballot because of her claimed role in the Jan. 6 attack.

The plaintiffs’ attorneys have until Thursday to submit final submissions to the court, which means the additional text messages could be used by the plaintiffs. “About a week later,” the judge stated he hopes to finish his recommendation.

Greene’s name will then be forwarded to Georgia Secretary of State Brad Raffensperger, who will decide whether or not to keep him on the ballot for the state’s primary on May 24.