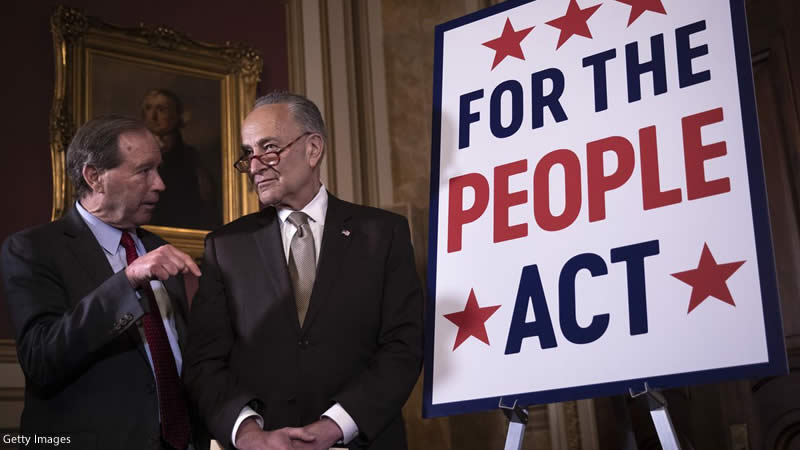 Sen. Joe Manchin joined all Republicans in voting to block the legislation, which Democrats want to highlight in the 2022 midterm elections.

The Senate failed to advance a Democratic-led bill that enshrined broad protections for legal abortion nationwide on Wednesday, a vote triggered by a leaked Supreme Court proposal opinion indicating Roe v. Wade is likely to be overturned.

According to AP News, The Women’s Health Protection Act, which passed the House, received 49 votes, far short of the 60 required to break a filibuster.

All 50 Republicans and Democratic Sen. Joe Manchin of West Virginia voted against proceeding to debate. The outcome was 49-51.

A group of House members appeared on the Senate side of the Capitol just before the vote and chanted “my body, my decision!” as they walked along the halls outside the chamber.

Democratic leaders saw the vote as an opportunity to stake out a position ahead of the November midterm elections, when their party faces a slew of challenges, varying from President Joe Biden’s low approval ratings to voters’ concerns about inflation. Party strategists hope to persuade the sizable majority of Americans who support Roe v. Wade to vote Democratic.

“Republicans in Congress — not one of whom voted for this bill — have chosen to stand in the way of Americans’ rights to make the most personal decisions about their own bodies, families, and lives,” Biden said in a statement after the vote. “To protect the right to choose, voters need to elect more pro-choice senators this November and return a pro-choice majority to the House. If they do, Congress can pass this bill in January, and put it on my desk, so I can sign it Into law.”

Senate Majority Leader Chuck Schumer, D-N.Y., said it was “one of the most consequential” votes the Senate has held in decades. “For MAGA Republicans, this has always been about making abortion illegal everywhere,” he said in a floor speech.

After the vote, Schumer said Democrats are “going to continue to highlight this issue relentlessly and strongly between now and November because it is so important.”

“Make no mistake. It is not Roe v. Wade codification. It’s an expansion,” he said. “It expands abortion. … We should not be dividing this country further than we’re already divided.”

Sen. Bob Casey, D-Pa., who has held anti-abortion views for years, came out in favor of the bill Tuesday, saying the circumstances had changed.

Two Republican senators — Susan Collins of Maine and Lisa Murkowski of Alaska — say they support abortion rights and have proposed a narrower bill that includes carve-outs for religious or moral objections. They said the Democrats’ bill was too broad.

Ahead of the vote, Senate Democratic leaders circulated a letter from progressive and reproductive rights groups — including the Center for American Progress, NARAL Pro-Choice America, and Planned Parenthood — arguing that the Collins-Murkowski bill is too narrow and “would not protect the right to abortion.”

While Democrats seek to paint Republicans and their chosen conservative judges as radical, the GOP has spent recent days arguing that Democrats are out of touch with most Americans, who say in surveys that they favor some restrictions on legal abortion.

A Pew Research Center poll taken in March, before the Supreme Court draft opinion was leaked, found that 61 percent of U.S. adults say they want abortion to be legal but that just 19 percent say it should be legal in all cases, without exception.

“Our Democrat colleagues want to vote for abortion on demand through all nine months, until the moment before the baby is born — a failed show vote that will only prove their own extremism,” he said in a floor speech Wednesday.

The leaked Supreme Court proposal opinion may not be the final ruling, and it has no legal force until it is issued. However, the court was widely expected to overturn Roe v. Wade and the subsequent Planned Parenthood v. Casey decision, which upheld a constitutional right to abortion.