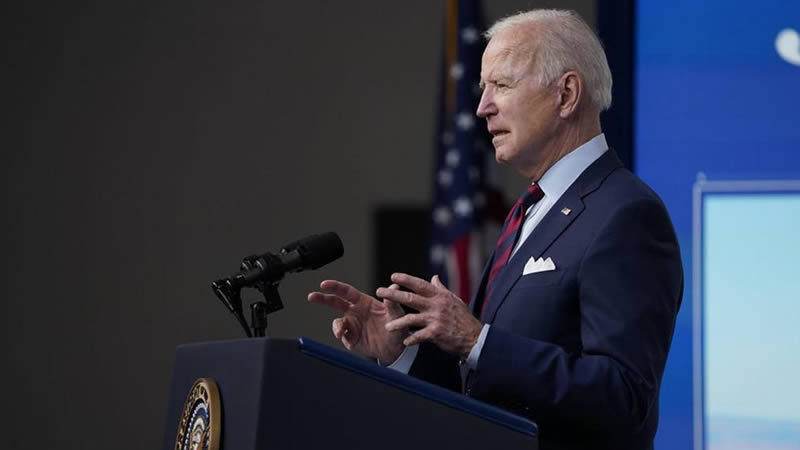 Private insurers will be required to cover the cost of at-home Covid-19 tests, and testing procedures for those entering the US will be tightened.

On Thursday, President Joe Biden launched a more urgent campaign to encourage Americans to get COVID-19 booster doses as part of his winter plans to combat the coronavirus and its omicron form, which include increased availability of shots and vaccinations but no substantial new restrictions.

Private insurers will be required to cover the cost of at-home COVID-19 tests, and testing requirements for persons entering the US regardless of vaccination status will be tightened.

Officials said Biden would not impose more restrictions beyond his request that Americans wear masks indoors in public settings when other countries close their borders or reimpose lockdowns.

Biden’s plan was revealed by the White House early Thursday, before his speech.

The Biden administration has come to believe that extensive booster vaccination is the most effective way to battle COVID-19 this winter. Boosters, according to medical specialists, give better and longer-lasting protection against COVID-19, including novel forms.

Under current US policy, approximately 100 million Americans are eligible for boosters, with more becoming eligible every day. Officials anticipate that persuading people who have already been vaccinated to receive another dose will be significantly easier than persuading the nearly 43 million adult Americans who haven’t taken a vaccine despite widespread public pressure to do so.

While Biden’s vaccination-or-testing requirement for larger employers has been stalled by legal challenges, the president will renew his plea on Thursday for businesses to move forward and impose their own standards on workers so they can be protected.

The Biden administration is stepping up direct outreach to seniors, the population most vulnerable to the virus, in an effort to convince more people to take the booster doses. According to the White House, the Centers for Medicare & Medicaid Services will issue a notification to all 63 million Medicare beneficiaries encouraging them to get booster doses. The AARP will collaborate with the administration on elder education efforts.

A booster dose has been given to around 42 million Americans, almost half of whom are seniors. The Centers for Disease Control and Prevention (CDC) expanded its booster dose prescription this week to include all Americans aged 18 and up starting six months after their second dose of Pfizer or Moderna’s mRNA vaccines.

The White House said the CDC was also developing new guidance for schools in an effort to reduce or eliminate current quarantine requirements for those who are not fully vaccinated and exposed to the virus.

The new standards, which the White House said will be revealed in the coming weeks, might include test-to-stay policies, in which students who are considered close contacts can continue to attend school but must wear masks and undergo serial testing in order to avoid learning loss and disruption.

The administration’s planned rule requiring private insurers to fund at-home testing is still being prepared, and many details, including the criteria under which they will be reimbursed, are still being ironed out, officials said. Those covered by Medicare and Medicaid would be ineligible, but the White House estimates that up to 150 million people with private insurance would benefit from easier and less expensive at-home testing.

Beginning next week, all travelers to the United States, regardless of nationality or vaccination status, will be required to show documentation of a negative COVID-19 test within one day of boarding their aircraft, according to the White House.

For individuals who have been vaccinated, this is down from three days right now, as a further precaution against the omicron variant. Tougher options, such as requiring post-entry testing or quarantines upon arrival in the US, have been postponed by the White House.

According to the White House, Biden is also extending his rule requiring masks on aircraft and other public transportation, which was supposed to expire in January, until at least the middle of March.

As per Business-standard, the administration is also informing states that it has more than 60 teams available to assist them or their municipalities in dealing with surges in cases and public health shortages as the winter approaches, with half of them focused on improving hospital services and the other 20 on supporting life-saving monoclonal antibody treatments.

As Joe Biden Snubs Hungary, Viktor Orbán Fears Election Interference
Will Epstein’s Rich & Powerful Friends Be Revealed in the Maxwell Trial, or Will It Be Another Cover-Up?