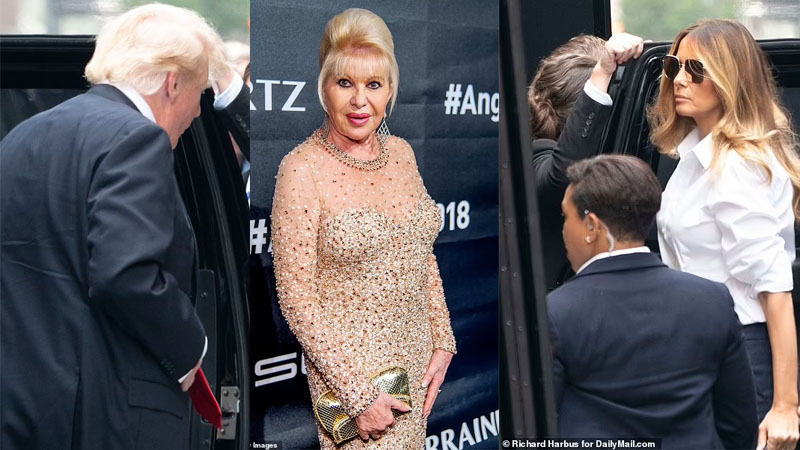 Four days after Ivana, 73, was found dead and abandoned in the stairway of her Upper East Side house, the couple moved back into their old apartment in Trump Tower on Monday, according to pictures published by the Daily Mail.

Shortly after it was announced that Ivana’s funeral ceremony would take place on Wednesday at St. Vincent Ferrer Catholic Church in her neighbourhood, they arrived in Manhattan. Her memorial service is set to begin at 1:30 pm. Ivana will be buried following the service.

Ivana’s three children – Donald Trump Jr., Ivanka Trump, and Eric Trump, are anticipated to attend the service. Although it hasn’t been confirmed yet, it seems like the former president and Melania will also go.

Ex-President Trump, 76, wore a black suit as he exited an SUV on Monday and was escorted by security guards into the luxury high-rise. Melania sported black lacks, a white collared shirt, and sunglasses.

The businesswoman and socialite Ivana was born in Czechoslovakia in 1949. She was married to Donald from 1977 to 1949 and held managerial positions within the Trump Organization before launching her own jewellery, clothing, and beauty product lines.

Ex-President Trump posted on Truth Social that she was a ‘wonderful, beautiful, and amazing woman, who led a great and inspirational life’.

‘Her pride and joy were her three children, Donald Jr, Ivanka, and Eric. She was so proud of them, as we were all so proud of her,’ he wrote on Thursday. ‘Rest In Peace, Ivana!’

As per Metro, the chief medical examiner announced on Friday that Ivana’s cause of death was ‘blunt impact trauma’ and that the manner of her death was an ‘accident’.