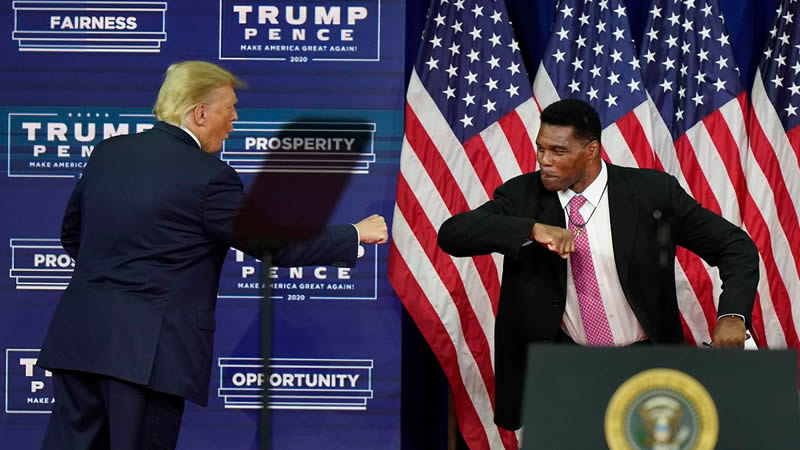 After months of speculation, Herschel Walker filed paperwork to run for the United States Senate in Georgia on Tuesday, joining other Republicans aiming to unseat Democratic Senator Raphael Warnock in 2022.

Walker, 59, comes into the contest with high name recognition, having won the Heisman Trophy as a running back for the University of Georgia in 1982. Perhaps more importantly in today’s Republican Party, he has former President Donald Trump’s support.

Walker has never run for office before, and his turbulent personal history, as well as his policy stances, will almost certainly be scrutinized. However, if he emerges from the Republican primary, the Senate contest will have two Black men competing for a seat in the Deep South.

Walker remained silent on Tuesday, maintaining a pattern of few comments as he prepares to run for Senate. Last week, he registered to vote using an Atlanta residence owned by his wife, Julie Blanchard. Walker signed papers with the Federal Election Commission declaring his candidacy on Tuesday, allowing him to gather money for a Senate run.

Former Sen. Kelly Loeffler, who lost to Warnock in a special election in January, and U.S. Rep. Buddy Carter, a four-term congressman from near Savannah, are two of some other potential GOP contenders who may not run with Walker’s entry into the race.

Walker and Trump’s relationship dates back to the 1980s when Walker was a member of a Trump-owned team in the short-lived United States Football League. Walker, who went on to play 12 seasons in the NFL, spoke out in support of Trump at the 2020 Republican National Convention and later attended Trump’s private birthday party.

Trump has publicly encouraged Walker to enter the primary, telling a radio broadcast in June that “he’s a great guy, he’s a patriot and he’s a very loyal person, he’s a very strong person. They love him in Georgia, I tell you.”

With Trump the “defining figure” in today’s GOP, University of Georgia political science professor Charles Bullock said his backing might be all Walker needs.

Bullock said, “If he tells them they need to go out and vote for Herschel Walker, that’s the strongest endorsement he can possibly get.”

Georgia Democratic Party spokesperson Dan Gottlieb said in a statement, “By the end of this long, divisive, and expensive intra-party fight, it’ll be clear that none of these candidates are focused on the issues that matter most to Georgians.”

Warnock told the Atlanta Press Club last week when asked about Walker, “And I hear there’s a race next year.”

Walker has been tweaked by Black for his long absence from Georgia, and he did so again Tuesday in a video “welcoming” Walker to the race and challenging him to attend a Republican fish fry Saturday south of Macon.

Sadler said in a statement that he’s a better choice as a “next-generation conservative leader who can beat Raphael Warnock.”

“This campaign isn’t about the glories of yesterday; it’s about our nation’s future,” said Sadler.

Walker has been residing outside of Dallas and is running for politics for the first time. Untested as a candidate, it’s uncertain if he’ll be a good campaigner or fundraiser, while also fleshing out positions on policy matters, he’s never had to deal with in-depth. Walker has backed Trump’s baseless assertions that he was cheated out of reelection.

Walker also has a turbulent personal history that could factor into a campaign. He has recently made a series of outsized claims regarding his business achievements. He stated that his company employed hundreds of workers and grossed $70 million or more in annual sales.

When Walker’s company applied for a federal Paycheck Protection Program loan last year, it only reported eight employees. Walker claimed in a recent court case that his company made roughly $1.5 million per year on average from 2008 to 2017.