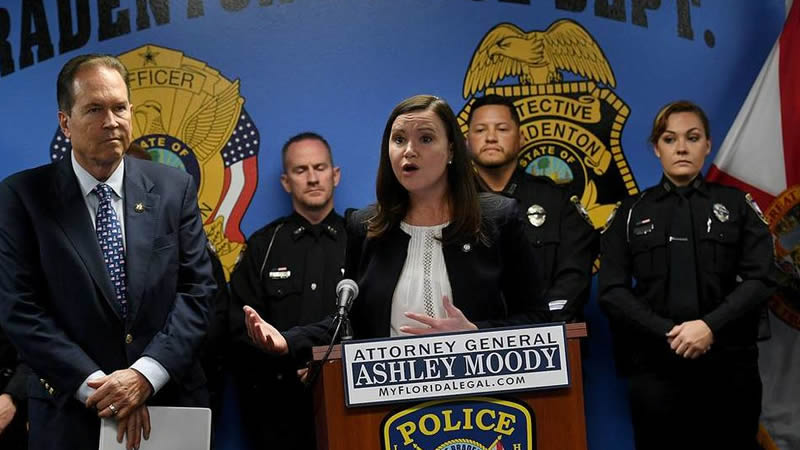 In recent years, Buchanan has supported the “Thin Blue Line Act,” which would make killing a police officer, firefighter, or first responder in federal jurisdiction an aggravating factor in federal death sentence decisions.

The proposal was introduced in 2015 by then-US Rep. David Jolly, R-Fla. After Jolly was defeated in 2016, Buchanan took up the bill and got it enacted in the House in May 2017, but it never made it to the U.S.Senate.

Moody said, “Our brave law enforcement officers risk their lives daily to protect and serve their communities. The first seven months of this year alone resulted in unprecedented violent acts, resulting in dozens of line-of-duty deaths for officers across our nation.

We cannot permit the anti-police sentiment and blatant disrespect for law enforcement to fester and grow. Violent attacks on officers not only affect those who wear a badge, but it also lessens the safety and security of our communities at large.”

“I am asking congressional leaders to take immediate action to protect those who swore an oath to serve by supporting the Thin Blue Line Act. This legislation will provide local and state law enforcement officers the same protection and support currently provided to federal officers—acting as a deterrent to anyone who would look to harm an officer,” she added.

Moody wrote to congressional leaders, urging them to pass the bill.

“Police officers and first responders put their lives on the line every single day to help those in harm’s way,” said Buchanan. “I appreciate Attorney General Moody’s strong endorsement and advocacy for my bill, the Thin Blue Line Act. Together, we are sending a strong message to police and first responders that we have their backs, and those who target our frontline heroes should know that there will be severe consequences.”

While Buchanan was unable to pass the law in the Senate, where it was championed by the late U.S. Sen. John McCain, R-Ariz., and U.S. Sen. Ted Cruz, R-Texas, most members of the Florida delegation from both parties backed it, though none are now co-sponsoring it.