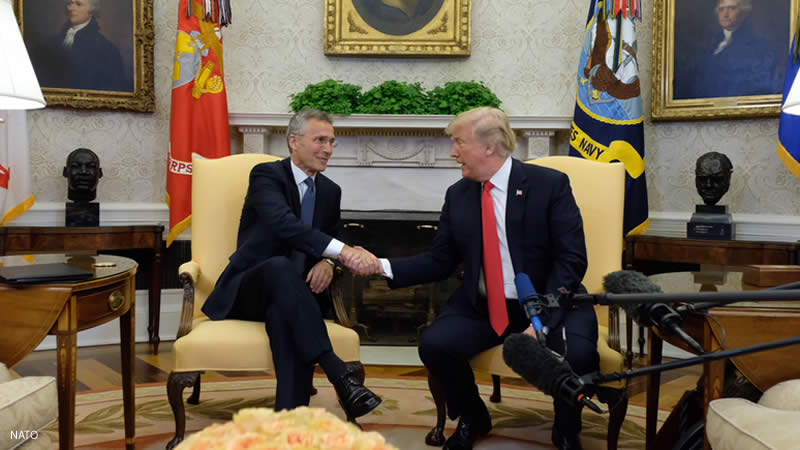 Former President Donald Trump, who has a long history of criticizing the North Atlantic Treaty Organization (NATO) and has discussed removing the United States from the alliance as president, has now claimed credit for its existence.

He’s also lauding himself for supplying Ukraine with weapons, despite threatening to withhold security assistance unless it helped smear Joe Biden ahead of the 2020 election.

“I hope everyone is able to remember that it was me, as President of the United States, that got delinquent NATO members to start paying their dues, which amounted to hundreds of billions of dollars,” Trump wrote in a statement released Monday. “There would be no NATO if I didn’t act strongly and swiftly.”

“It was me that got Ukraine the very effective anti-tank busters (Javelins) when the previous Administration was sending blankets. Let History so note!” Trump continued, conveniently ignoring the fact that he was impeached for withholding $400 million in congressionally authorized military aid from the country in order to extort President Volodymyr Zelensky into manufacturing dirt on Biden and his family.

Trump’s statement is yet another attempt to rewrite “History” by portraying himself as NATO’s most important ally. In one of the former president’s books, The America We Deserve, published in 2000, he claimed that money sent to NATO by the United States was wasted.

“America has no vital interest in choosing between warring factions whose animosities go back centuries in Eastern Europe,” he wrote, according to The Daily Beast. “Their conflicts are not worth American lives. Pulling back from Europe would save this country millions of dollars annually. The cost of stationing NATO troops in Europe is enormous. And these are clearly funds that can be put to better use.”

Trump’s acrimony toward NATO continued into his presidential campaign and throughout his administration. In a 2016 interview with The New York Times, Trump described NATO as “obsolete” and “unfair, economically, to … the United States.” As president, Trump berated other NATO nations for not meeting certain fundraising benchmarks and toyed with the idea of leaving the alliance. According to the Times, Trump in 2018 “told his top national security officials that he did not see the point of the military alliance, which he presented as a drain on the United States.”

Reacting to the news Trump wanted to withdraw from NATO, Michèle A. Flournoy, who served as undersecretary of defense under former President Barack Obama, told the Times that to do so “would be one of the most damaging things that any president could do to U.S. interests.”

While he is now trying to portray himself as Ukraine’s savior and on Saturday called Russia’s attack “appalling,” Trump only days before praised Putin for the invasion, saying on a podcast, “Putin declared a big portion of … Ukraine … as an independent. Oh, that’s wonderful. … I said, ‘How smart is that?’”