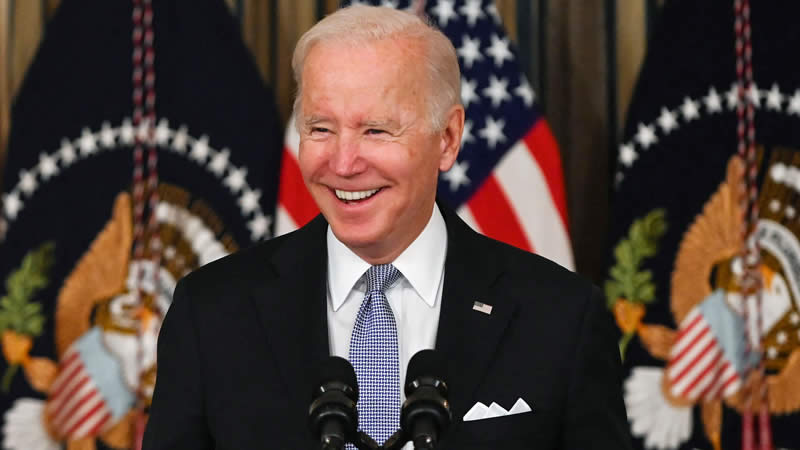 Democratic Sen. Joe Manchin dropped the ax on his party’s agenda on Sunday, saying he would not support President Joe Biden‘s economic and climate package, just as the White House braces for another Covid winter, which is likely to escalate the nation’s mood heading into a midterm election year.

The abrupt move by West Virginia’s senator was a sharp break from the White House, infuriating progressives who had reluctantly agreed to advance the bipartisan infrastructure deal earlier this year, believing that Biden would be able to secure the votes needed to pass the Build Back Better bill in the Senate quickly.

Manchin’s split with his party underscored how rifts within the Democratic caucus have frequently stymied the party’s ability to deliver for voters. While some progressives tried to rally their colleagues on Sunday not to give up hope and to press on with negotiations to reshape the bill in a different form, the debacle illustrated how a single vote in the 50-50 Senate could derail what Democrats have viewed as their best vehicle for making tangible improvements in voters’ lives before the 2022 elections.

Biden campaigned on the promise of being able to build consensus in Congress and end the pandemic, but Manchin’s defection could further undermine voters’ confidence in the President’s ability to lead. Even after months of long discussions with Biden, whom he explained as “wonderful to work with,” the moderate Democratic senator explained on Sunday that he could not overcome his concerns that the nearly $2 trillion bills would aggravate inflation at a time when Americans are already reeling from rising prices everywhere from the grocery store to the gas pump. (Democratic bill proponents and White House officials have repeatedly refuted that logic, claiming that the legislation would reduce inflation over time.)

According to CNN, White House aides learned about Manchin’s decision from a member of his staff about 30 minutes before his television appearance, and the White House issued an unusually cutting rebuke – personally signed off on by Biden – following what they framed as a reversal of Manchin’s stance in talks with the administration.

White House press secretary Jen Psaki noted that Manchin presented the President with a “written outline” for the Build Back Better bill on Tuesday that was “the same size and scope of the President’s framework,” covering “many of the same priorities” — raising hopes that the two could reach a compromise. She noted that the West Virginia senator had promised to continue talks in the days ahead.

“If his comments on FOX and written statement indicate an end to that effort, they represent a sudden and inexplicable reversal in his position, and a breach of his commitments to the President and the Senator’s colleagues in the House and Senate,” Psaki wrote.

The economic and climate package includes a wide range of programs intended to assist American families, which Democrats were eager to discuss on the campaign trail next year, despite Republican criticism of the bill’s size. It includes universal pre-kindergarten for 3- and 4-year-olds, child care assistance, a federally funded paid family and sick leave program, and a one-year extension of the enhanced child tax credit. It would also allow Medicare to negotiate over the price of certain medications administered in doctors’ offices or purchased at pharmacies. The bill includes tax increases on corporations and wealthy households to generate revenue to fund new benefits.

Democrats intended to do so through the budget process known as reconciliation, which only requires 51 votes to pass, eliminating the need for Republican support.

Despite Manchin’s announcement, the Senate will vote on the legislation early next year to allow members to express their views, Senate Majority Leader Chuck Schumer said Monday morning, adding that Democrats will continue to push for passage of a version of the plan.

Sen. Bernie Sanders, an independent who caucuses with Democrats and manages the Budget Committee, demanded that Manchin be held accountable to his constituents.

“He’s going to have a lot of explaining to do to the people of West Virginia to tell them why he doesn’t have the guts to take on the drug companies to lower the cost of prescription drugs; why he is not prepared to expand home health care,” Sanders told CNN’s Jake Tapper on “State of the Union” Sunday, reeling off some of the benefits in the bill and how they would have helped impoverished West Virginians.

In another sign of the open warfare within the party, Rep. Pramila Jayapal of Washington state, who chairs the Congressional Progressive Caucus, said in a statement Sunday that Manchin had “betrayed his commitment not only to the President and Democrats in Congress but most importantly, to the American people.”

“He routinely touts that he is a man of his word, but he can no longer say that. West Virginians, and the country, see clearly who he is,” Jayapal said.

Negotiating from a position of weakness

Democrats, on the other hand, have been negotiating from a weakened position, counting down the days until midterm elections that, based on historical trends and the President’s low approval ratings, are likely to favor the GOP. Republicans have relentlessly attacked the bill as the latest example of Democrats’ wasteful spending, and Biden’s shaky poll numbers have raised questions about how broad a mandate he has to make massive changes to the nation’s social safety net.

A Monmouth University poll conducted in early December found broad support for the Build Back Better legislation, with 61 % in favor. However, polls show that Americans are worried about how Biden’s policies are affecting the economy. According to a CNN poll released last week, three-quarters of Americans are concerned about the state of the economy in their own community.

Among the most concerning findings for the White House in CNN‘s poll was that only 30% of Americans said Biden’s policies had a positive impact on economic conditions, while 45% said they had a negative impact and a quarter said they had no impact. Approximately 8 in 10 people said rising food prices and other everyday problems were major issues for the nation’s economy. According to the Bureau of Labor Statistics, consumer price inflation rose by 6.8% in November, a level not seen in 39 years.

Both the White House and progressive Democrats have vigorously rejected allegations made by Manchin and Republicans that the bill would raise inflation. The White House on Sunday cited a recent Penn Wharton Budget Institute report that found the legislation would “have virtually no impact on inflation in the short term, and, in the long run, the policies it includes will ease inflationary pressures.”

But that hasn’t stopped Manchin from raising the issue, much to the delight of Republicans who hoped inflation fears would torpedo the bill.

“Christmas has come early for all the hardworking Texas families that would have been saddled with higher taxes, child care costs, & prices at the pump if Build Back Bankrupt had passed,” tweeted Republican Sen. John Cornyn of Texas, reacting to Manchin’s announcement.

But Manchin’s position led Goldman Sachs to revise its US economic outlook, with the Wall Street firm’s economists stating in a research report that a failure to pass the Build Back Better legislation “has negative growth implications.” The firm now expects GDP to grow at an annualized pace of 2% in the first quarter, down from 3% previously, citing the “apparent demise” of the legislation.

Bracing for a Covid-19 Christmas surge

On Sunday, Manchin announced his opposition to the Build Back Better Bill, arguing that leaders in Washington should be most concerned with the arrival of the Omicron variant, which “we should all be directing our attention toward.”

It was a sobering reminder to a White House that had hoped to be past the worst of the pandemic by now that things are likely to get worse before they get better, frustrating already tired Americans as they enter an election year.

Noting how fast Omicron cases are doubling, Dr. Anthony Fauci warned on Sunday that the United States is in for a “tough few weeks to months as we get deeper into the winter.” According to the US Centers for Disease Control and Prevention, only about 61.4 % of Americans are fully vaccinated. And only about 29.5 % of them are boosted, according to experts, which offers the best protection.

According to the nation’s top infectious disease specialist, the increase in cases will put a significant strain on hospital systems, especially in places with low vaccination rates.

He made another push for Americans to get vaccinated — and if they want to be “optimally protected, get boosted,” he said while stressing that the nation “can’t walk away” from other mitigation measures like masking and testing.

Democratic Senators Elizabeth Warren of Massachusetts, Cory Booker of New Jersey, and Representative Jason Crow of Colorado all announced on Sunday that they had tested positive for Covid-19 despite being fully vaccinated and boosted. All three reported only mild symptoms.

Nonetheless, the rapid increase in Covid cases does not appear to be deterring Americans from their Christmas travel plans. TSA checkpoint data from the end of last week, including Thursday, Friday, and Saturday, revealed that more than 2 million passengers were screened each day at US airports, nearly doubling the figure from a year ago but still falling short of the pre-pandemic figure from 2019.

Biden will meet with advisers on Monday for a briefing on the latest developments regarding the Omicron variant before delivering a speech on Tuesday in which he will issue a “stark warning of what the winter will look like for Americans who choose to remain unvaccinated,” according to the White House.

As Americans prepare for the holiday season, the President will have yet another sobering message to deliver after a year of disappointments for his administration.