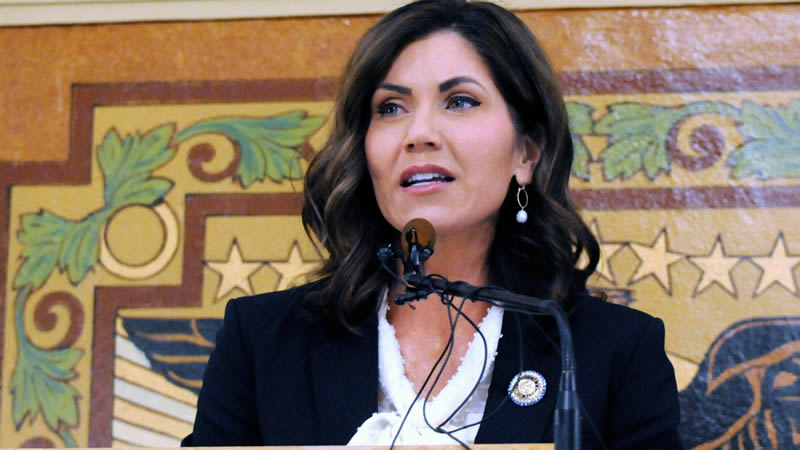 South Dakota Governor Kristi Noem announced on Tuesday that she has proposed legislation in her state that would prohibit women and girls from participating in female sports teams. The bill is the most recent in the governor’s efforts to impose the ban at both the high school and collegiate levels.

According to the drafted legislation, Noem proposed, all athletic teams in the state must be organized based on participants’ biological sex at birth and must be classified as females, males, or coeducational. The proposal will be discussed during the January legislative session.

The legislation puts an emphasis on transgender women and girls, saying “only female athletes, based on their biological sex, may participate in any team, sport, or athletic event designated as being for females, women, or girls.” There is no specific mention of transgender boys or men or those who are non-binary.

If an athletic entity or school violates these rules, Noem’s proposal would allow any athlete who “suffers direct or indirect harm” as a result of their actions to search for injunctive relief. The proposal also states that if an athlete is retaliated against, they can seek additional relief.

Schools, school districts, and higher education institutions would also be able to file for relief if they believe they have been harmed as a result of a violation of the ban.

Noem said Tuesday that her proposal is an attempt to “defend fairness in girls’ sports at both the K-12 and collegiate level.”

“Every young woman deserves an equal playing field where she can achieve success, but common sense tells us that males have an unfair physical advantage over females in athletic competition. It is for those reasons that only girls should be competing in girls’ sports,” she said. “Women have fought long and hard for equal athletic opportunities, and South Dakota will defend them, but we have to do it in a smart way.”

Noem had promised to sign similar legislation earlier this year, but when it passed the Legislature on March 8, he issued a partial veto, according to the Associated Press.

Among the bill’s vetoed provisions was one that would have extended the ban to college-level sports. According to the Associated Press, Noem argued at the time that enforcing the ban in a collegiate setting would result in the NCAA pulling tournaments out of the state.

Following that veto, Noem issued executive orders banning transgender females from participating in female sports at both the K-12 and collegiate levels. In the collegiate-level order, Noem referred to transgender women as “males,” saying that allowing them to play in the sports that align with their gender will “threaten to diminish opportunities for women, due to the inherent physical differences between men and women.”

Her most recent proposal is an attempt to codify those rules.

“Trans lives in South Dakota are not up for debate. Trans girls are girls. Trans women are women. Period,” Equality South Dakota tweeted on Tuesday.

According to the American Civil Liberties Union of South Dakota, the draft legislation violates the Constitution and Title IX.

“Noem claims she wants to ‘promote fairness in women’s sports,’ but if that were true, she’d tackle the actual threats to women’s sports such as severe underfunding, lack of media coverage, sexist ideologies that suggest that women and girls are weak, and pay equity for coaches,” the organization tweeted. “If the Governor’s proposed legislation is any indication of what’s to come during the 2022 legislative session, discriminatory rhetoric will again take precedence over issues that South Dakotans really care about.”

The proposal comes on the heels of what is believed to be the deadliest year in US history for transgender people. The year also saw an increase in legislation targeted directly at transgender youth, particularly in terms of sports participation and access to health care.

In the 2020 and 2021 legislative sessions, more than 100 bills have been proposed across the United States. Texas, Arkansas, Tennessee, Montana, and West Virginia have all signed legislation prohibiting transgender students from participating in sports teams that correspond to their gender.

The majority of the proposals introduced in the last year have failed, but advocates have warned that their mere existence can have an impact on transgender youth. The Trevor Project reported that during the pandemic, it received “more than double” the typical volume of calls and messages from youth experiencing mental health crises.

The organization estimated at least one LGBTQ individual between the ages of 13 and 24 in the United States attempts suicide every 45 seconds.

“I think for a lot of kids, it’s just a terrifying reinforcement of the most damaging messages that there’s something wrong with them and they don’t belong and they must try to make themselves into somebody that they’re not,” Jenny Pizer, law and policy director at Lambda Legal, previously told CBS News. “And they try and try and try and can’t, and so they feel like a failure.”

“And the message is that the person that they are has no worth, doesn’t belong, shouldn’t be here,” Pizer continued, “they’re just broken.”