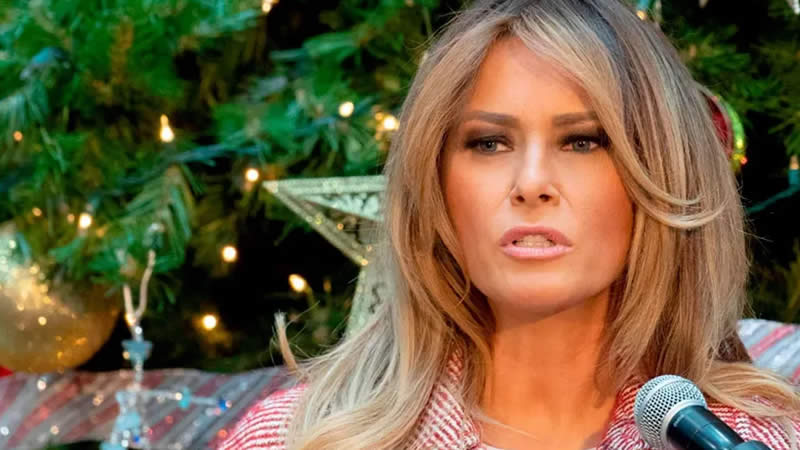 During her four years in the White House, Melania Trump received a lot of backlash for her Christmas decorations. Melania Trump replaced traditional fir trees with white branches in President Donald Trump’s first year in office, which were widely mocked on social media for being “creepy.” She put red, cranberry-covered trees at the White House the next year, which were again criticized for looking to be coated in blood.

This week, then-President Trump criticized the media for their coverage of his wife’s Christmas decorations.

“She would have the most beautiful Christmas decorations,” he remarked in an address at Dallas’ First Baptist Church.
“I remember she made these magnificent red trees, and the media said ‘Oh, that’s terrible. I said, ‘Honey, next time try white.

“She made magnificent ‒ remember, the most beautiful you’ve ever seen ‒ white trees, and they said, ‘Oh, that’s terrible.

“I said the next time, ‘Let’s do it more traditional. Let’s go with green.”

Last year, recently found recordings suggested that the pressure to adorn the White House had an effect on the former First Lady.

Melania Trump had a foul-mouthed complaint about the White House’s Christmas decorations, according to an audio recording.

Melania was referring to a well-publicized visit to the US-Mexico border to see children who had been separated from their parents.

During the visit, the First Lady had clumsily worn a jacket that said, “I don’t really care. Do u?”

She said in a statement: “Secretly taping the First Lady and willfully breaking an NDA to publish a salacious book is a clear attempt at relevance.

“The timing of this continues to be suspect ‒ as does this never-ending exercise in self-pity and narcissism.”

Mr. Trump has held a number of rallies for his base after being booted from the White House, sparking speculation that he would run for office in 2024.

Mr. Trump suggested in one of his many interviews in recent weeks that Americans should thank him for the fact that they can still say “Merry Christmas.”

Mr. Trump stated in an interview with Newsmax that he battled a “woke” agenda that sought to abolish the term due to its lack of inclusiveness.

Mr. Trump said: “When I started campaigning [in 2016], I said, ‘You’re going to say Merry Christmas again.’ And now people are saying it.”

He added: “That was part of my campaign. The country had started with this ‘woke’, I guess, a little bit before that.
“And it was embarrassing for stores to say ‘merry Christmas’.

“You’d see these big chains ‒ they want your money, but they don’t want to say ‘Merry Christmas.’ And they use reds and they’d use whites and snow, but they wouldn’t say Christmas.”