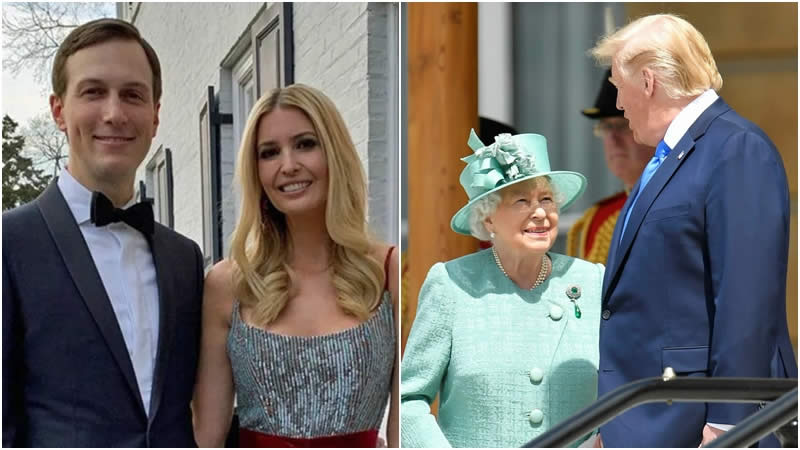 Ivanka Trump and Jared Kushner tried to attend a meeting with Queen Elizabeth II but were stymied when there was no room in the president’s helicopter for them: Book claims.

According to a new book, Ivana Trump and Jared Kushner tried to attempt a meeting with Queen Elizabeth II during a presidential visit but were hindered when there was no space for them in the helicopter.

Stephanie Grisham, the former White House press secretary, reportedly said that Ivanka Trump and Jared Kushner fancied themselves as royalty, reveals in her upcoming biography, “I’ll Take Your Questions Now,” Donald Trump’s daughter and son-in-law wanted to attend the royal meeting, breaching protocol, but were turned away as they couldn’t fit into the helicopter.

“I finally figured out what was going on,” Grisham reportedly wrote in the memoir. “Jared and Ivanka thought they were the royal family of the United States.”

Grisham describes in the book how the first lady and White House staff called Ivanka Trump “the Princess,” and how she would frequently mention “my father” in professional work meetings.

Mr. Kushner is said to have been Mr. Trump’s “real chief of staff” and the former press secretary claims that Kushner was known as the “Slim Reaper” due to his reported tendency to engage in other’s projects and then remove himself from them when problems occurred.

Ms. Grisham took over as press secretary at a time when the Trump administration’s relationship with the press was at an all-time low. During her time in the White House, she ceased the daily press briefings and did not preside over a single one. She opted to give TV interviews instead.

She moved to become Melania Trump’s press secretary after less than a year on the job; she was succeeded in the White House by Kayleigh McEnany.