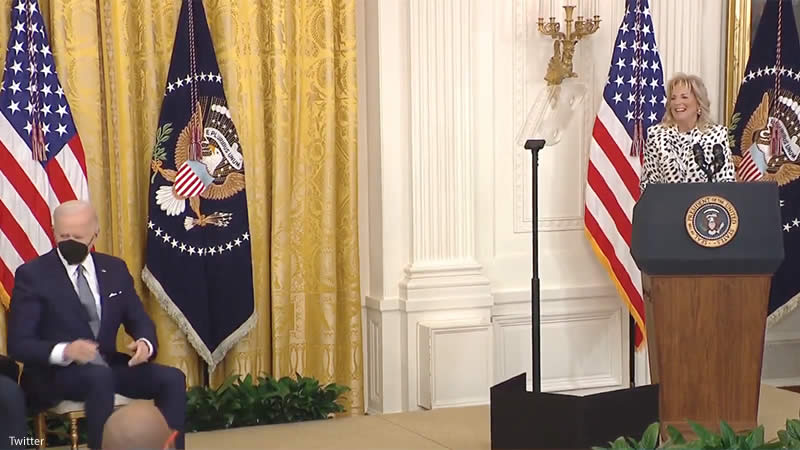 Although it isn’t the first time Kamala Harris has been referred to the President, the American First Lady passed off her fumble as a joke.

Jill Biden appeared to mix up Vice President Harris with her husband when introducing her at a White House event commemorating Black History Month. While President Joe Biden appeared to find the statement funny, he has been chastised in the past for making the same error.

The first lady said in her introduction: “As many of you know, our Vice President’s historic path to the White House began before she could even walk, marching with her parents in the Civil Rights movement, or at least being pushed in a stroller.

“Since then, she has dedicated her life to pursuing justice and opportunity for all.

“She is a partner to Joe, especially on issues like voting rights, and is proud to be the first, but not the last.”

She then said, “Ladies and gentleman, the President of the Uni- the Vice President,” before the room erupted in laughter.

She justified her remark by saying: “I just said that to make you laugh.”

President Biden appeared to like the joke, shrugging his shoulders, but his expression could not be seen because he was wearing a mask.

In the last year, he has referred to Vice President Harris as “President” on multiple occasions, leading to speculation that he is no longer sharp enough to be in office.

According to an ABC News/Washington Post poll, 54% of Americans say he has the “mental sharpness it takes to serve effectively as president”.

As per Reuters, President Biden reassured Americans that they would not need to be concerned about nuclear war after Putin ordered nuclear deterrents to be placed on high alert.

White House Press Secretary Jen Psaki said in a statement: “We think provocative rhetoric like this is dangerous, adds to the risk of miscalculation, should be avoided, and we’ll not indulge in it.

“We are assessing President Putin’s directive and at this time we see no reason to change our own alert levels.”

Donald Trump, who has a Long History of Criticising NATO now Claimed Credit for its Existence
Elon Musk Tells Ukrainian President Zelensky More SpaceX Internet Stations are On the Way