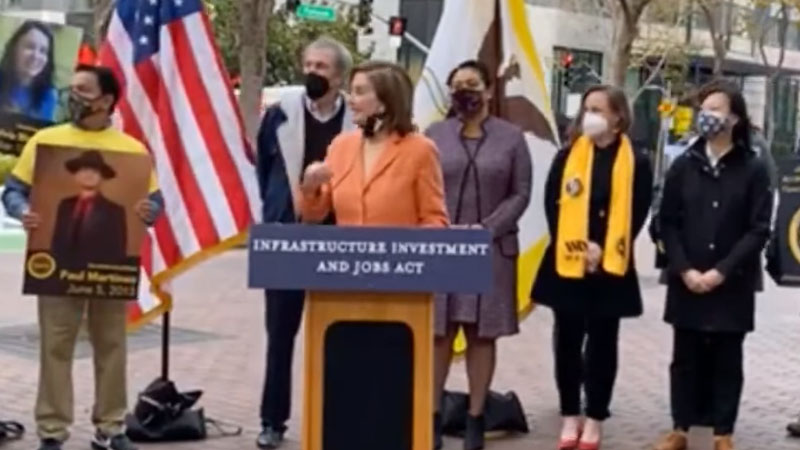 Fox News reported swamp monster and career politician, Nancy Pelosi, D-Calif., was overwhelmed by her own constituents shouting ‘Let’s Go Brandon’ as she gave a speech earlier this week.

Pelosi, who has made a career out of politics in Washington, D.C., appeared flustered when she heard the chant and abruptly ended her speech to applaud her own achievements.

Pelosi did not acknowledge the remark, despite the fact that everyone nearby heard it.

The embattled Speaker of the House has become increasingly desperate in recent months, so it is not surprising that she is being smashed.

Earlier this year, she begged with the mainstream media to lend even more support to Democrat-sponsored projects, claiming that their low-quality social engineering had resulted in the Democrats’ mostly failed attempts to “reset” America and the world.

“Well, I think you all could do a better job of selling it, to be very frank with you,” Pelosi whined at the time, “because every time I come here I go through the list: medical leave, climate, the issues that are in there.”

Aside from complaining about the state media’s lackluster efforts, the tyrannical Speaker has recently fantasized about what she would do if she had the complete political control.

Her answer? Impose her preferred brand of feminism on the masses.

“When people ask me, ‘If you ruled the world, what one thing would you do?’—I think about that a lot,” Pelosi said. “It would be to prioritize the education of women and girls … It would make the biggest difference not only in their lives, their families, their communities but to the world.”