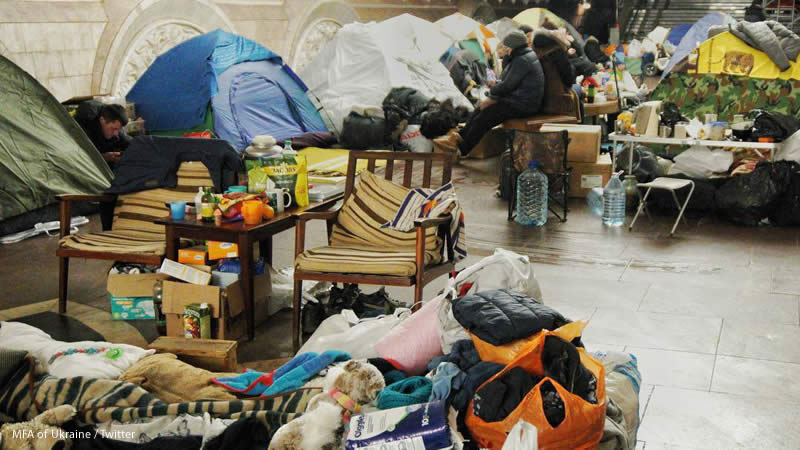 Since the start of the invasion, Russian forces have shelled Kharkiv’s residential structures and essential infrastructure.

Since the start of the Russia-Ukraine conflict a month ago, Vladimir Putin’s soldiers have continued to attack multiple cities, including Kharkiv. The Kharkiv metro station has been converted into a civilian bomb shelter.

Ukraine’s Ministry of Foreign Affairs posted photos on Twitter showing residents living in a metro station that has been converted into a bomb shelter. The children’s paintings have been hung on the metro station’s walls. People can be seen sleeping under tents on makeshift beds in this refuge in another photo. Concerts are also being held in these bomb shelters for the civilians who live here, according to a video released by news agency AFP.

Since the invasion began on February 24, Kharkiv has been in the crosshairs of Russian forces. The war-torn country’s nuclear watchdog claimed Russia shelled a nuclear site near Kharkiv, making it impossible to assess the damage, according to the Associated Press.

According to the State Nuclear Regulatory Inspectorate, the Kharkiv Institute of Physics and Technology’s neutron source experimental facility was targeted on Saturday.

Russian forces have been moving south from the area around Kharkiv and north from Mariupol, according to the UK Ministry of Defence. According to the ministry, Ukrainian counterattacks have hampered Russia’s efforts to reorganize its forces.

In a recent development, the Ukrainian media reported that Russia had lost 16,600 troops and 582 tanks since the invasion began, citing security sources. During the conflict with the Ukrainians, it also lost 121 planes and 127 helicopters. This is in contrast to the Kremlin’s statements that just 1,351 soldiers were killed and 3,825 military personnel were injured in action.

Western officials allege that seven Russian generals have been killed in battle, while the Kremlin has fired a key Russian military commander over allegations of strategic failure.

After failing to take over the entire country, Ukrainian military intelligence claims that Russia is attempting to break Ukraine into two parts. According to Reuters, the General Staff of Ukraine’s Armed Forces reported that Russia continued its “full-scale armed aggression,” while Ukrainian forces repulsed seven strikes in the eastern provinces of Donetsk and Luhansk.