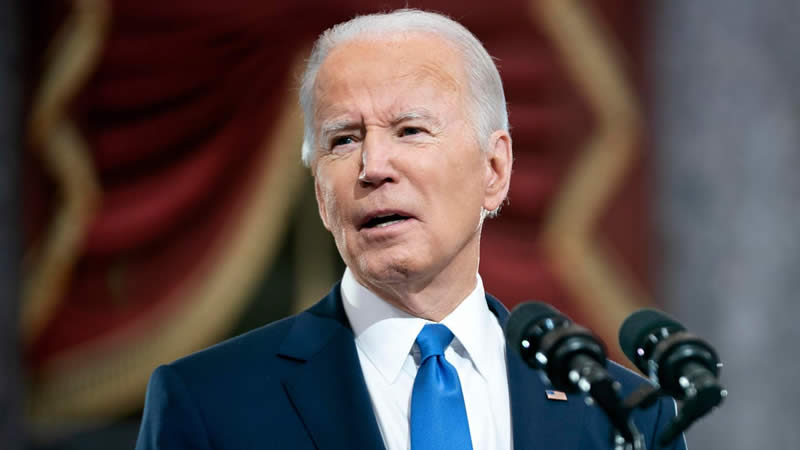 With less than 10 months until the 2022 midterm elections, President Joe Biden will travel to Georgia on Tuesday to make his most active effort yet for national voting rights laws, and he is expected to call for changes to the Senate’s filibuster rules in order for them to pass.

Biden’s remarks in Atlanta are expected to be a “forceful” call to action to protect voting rights, echoing his impassioned address on the anniversary of the Jan. 6 insurrection, in which he blamed former President Donald Trump and his supporters for holding a “dagger at the throat of democracy.”

“The president will forcefully advocate for protecting the most bedrock American rights: the right to vote and have your voice counted in a free, fair, and secure election that is not tainted … by partisan manipulation,” White House press secretary Jen Psaki previewed in her press briefing Tuesday.

“He’ll make clear in the former district of the late Congressman John Lewis, that the only way to do that is (sic) for the Senate to pass the Freedom to Vote Act and the John Lewis Voting Rights Advancement Act.”

The White House said in excerpts from Biden’s speech released Tuesday morning that he will put pressure on the Senate to act.

“The next few days, when these bills come to a vote, will mark a turning point in this nation. Will we choose democracy over autocracy, light overshadow, justice over injustice?” he was expected to say. “I know where I stand. I will not yield. I will not flinch. I will defend your right to vote and our democracy against all enemies foreign and domestic. And so the question is where will the institution of United States Senate stand?”

Georgia is one of 19 states that have implemented new voting laws in the run-up to the 2020 election.

According to the nonpartisan Brennan Center for Justice, there have been 34 such new laws across the country, with the majority of them passing in Republican-controlled states.

According to the Brennan Center, 13 more restrictive laws are in the works, including one in Georgia that would openly ban the use of ballot boxes.

Biden will speak alongside Vice President Kamala Harris from the grounds of Clark Atlanta University and Morehouse College, but the trip has been met with criticism from some voting groups, who warned the Atlanta Constitution-Journal that “anything less” than a finalized plan to pass voting rights in the House and Senate is “insufficient and unwelcome.”

The Asian American Advocacy Fund, Atlanta North Georgia Labor Council, Black Voters Matter Fund, GALEO Impact Fund, and New Georgia Project Action Fund all revealed Monday afternoon that they will not be attending the event and have asked Biden and Harris to stay in Washington.

“We don’t need another speech,” said Cliff Albright, executive director of the Black Voters Matter Fund. “What we need is action – what we need is a plan.”

Biden’s speech will be the third he has given on the topic of voting rights. It comes after the president indicated in an interview with ABC “World News Tonight” anchor David Muir that he would be open to making a one-time Senate rule change to the filibuster that would allow new voting laws to be passed with a simple majority.

Psaki stated that the president would address the filibuster directly.

“The President has spoken to this issue a number of times, as I’ve said before, including as recently as December where he said that, ‘if that is how we get this done, I’m open to that,'” Psaki said.

The president’s message, according to Psaki, will include a call to “ensure January 6 doesn’t mark the end of democracy, but the beginning of a renaissance for our democracy, where we stand up for the right to vote and have that vote counted fairly, not undermined by partisans.”

In her briefing, Psaki pushed back on criticism of the president, stressing that the speech Tuesday is focused on moving forward.

“We understand the frustration by many advocates that this is not passed into law yet. He would love to have signed this into law himself. But tomorrow’s an opportunity to speak about what the path forward looks like to advocate for – for this moving forward in the Senate.”

While Biden has indicated his desire to pass a voting rights bill with a filibuster permit, he would still need the support of all 50 Democratic senators to do so, which could be difficult with holdouts Sens. Joe Manchin and Kyrsten Sinema.

“Look, I think that everyone is going to have to take a hard look at where they want to be at this moment in history as we’re looking at efforts across the country to prevent people from being able to exercise their fundamental rights,” Psaki said when asked about Sinema’s opposition.

Senate Majority Leader Chuck Schumer has promised a vote on voting rights legislation soon and has warned to force another vote by Martin Luther King Jr. Day if Republicans filibuster the effort.

The White House insists that Biden and Schumer will “work in lockstep” to move a vote forward, but that they will take it “day by day.

Republicans see the proposed federal voting laws as an overreach by the government, and Senate Minority Leader Mitch McConnell has said Democrats are promoting a “fake narrative,” “fake outrage,” and “fake hysteria” about voting rights that has been “ginned up by partisans.”

The president tasked Harris in June with leading the administration’s efforts on voting rights reform. According to Psaki, the vice president has worked to “help build a groundswell of support.”