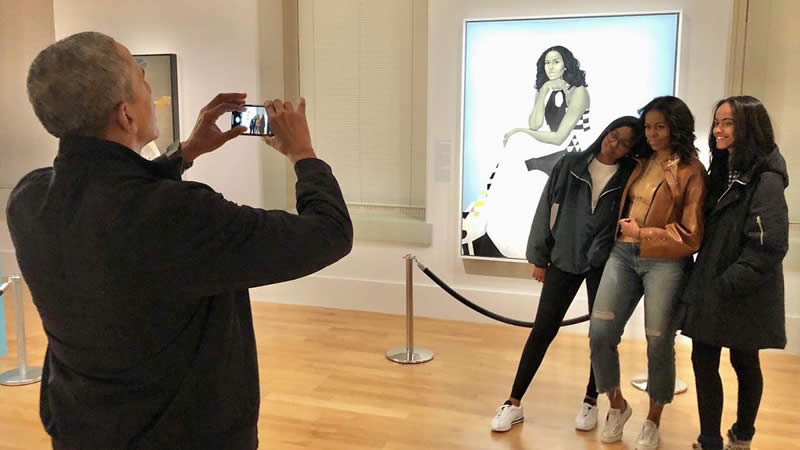 Barack Obama celebrated Father’s Day by dropping an adorable picture featuring his wife, Michelle Obama, and daughters, Malia and Sasha. He called himself the family’s designated photographer in the caption. Don’t miss the photo inside.

Barack Obama, the former President of the United States of America, celebrated Father’s Day by sharing this cute photo with his wife, Michelle Obama, and daughters Malia and Sasha. The 44th US President followed the photo with a heartfelt message in which he expressed his pleasure at being the father of his two daughters. He also referred to himself as the ‘designated photographer for the family.’ In the comments area, his fans poured their love for the family.
On Monday (IST), Barack Obama shared his Father’s Day post on Instagram.

The former United States President posted a picture that showed him clicking a photograph of his family as they posed in front of a portrait of Michelle Obama at a museum. “Happy Father’s Day to all the dads and father figures celebrating today! Of all that I’ve done in my life, I’m most proud of being Malia and Sasha’s dad…and the family’s designated photographer,” Barack wrote in the caption.

Barack’s post got several likes and comments from netizens. One user wrote, “Greatest First Family Ever.” Another commented, “Omg, I love how the FLOTUS looks like a sibling to the girls. Cutest family! Happy Father’s Day.”

Michelle Obama also celebrated Father’s Day with Barack Obama on Sunday. The former First Lady of the USA dropped a picture of her family that showed her, Barack, Malia and Sasha captured in a candid moment. She captioned it, “Happy Father’s Day to dads everywhere! Barack Obama, thanks for being the most loving and caring father to our girls. We love you.” Scroll ahead to check out her post.

Meanwhile, Father’s Day was celebrated on June 19 this year. On this day, we honor and remember the dads and father figures in our lives, as well as their impact on us. In most parts of the world, the day is celebrated on the third Sunday in June.