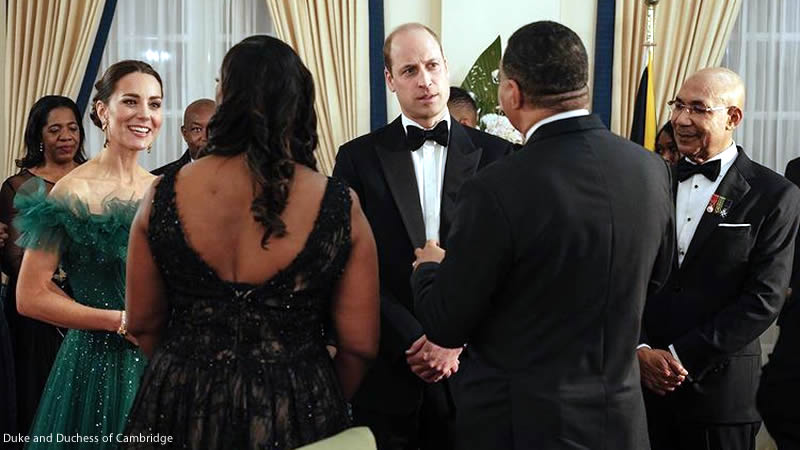 Prince William has expressed his deep “sorrow” for the horrors of the slave trade and Britain’s role in it.

“I want to express my profound sorrow. Slavery was abhorrent. And it should never have happened,” he said in a historic statement in Jamaica on Wednesday evening that acknowledged his country’s role in the trafficking of people to the Caribbean and the United States.

“While the pain runs deep, Jamaica continues to forge its future with determination, courage, and fortitude,” he continued. “The strength and shared sense of purpose of the Jamaican people, represented in your flag and motto, celebrate an invincible spirit.”

He repeated his father, Prince Charles, who condemned the “appalling atrocity of slavery, which forever stains our history” speech he made in Barbados last year at the country’s transition ceremony, which saw Queen Elizabeth removed as head of state and the country’s first president sworn in.

William stated that he “strongly” agreed with his father.

The official dinner at King’s House, the residence of the Governor-General of Jamaica, Sir Patrick Allen, who represents Queen Elizabeth, was attended by William and Kate Middleton. The royal couple is currently on the second part of their Caribbean tour in celebration of the monarch’s Platinum Jubilee.

As per BBC, his speech comes amid anti-colonial rallies and calls for Jamaica to drop William’s grandmother, Queen Elizabeth, as head of state.

Earlier on Wednesday, during a meeting with Jamaican Prime Minister Andrew Holness, Holness directly addressed his country’s decision to split from the British monarchy.

“There are issues here, which as you know, are unresolved, but your presence gives us an opportunity for those issues to be placed in context, to be out front and center and to be addressed as best we can,” he told William and Kate during their meeting. “But Jamaica is, as you would see, is a country that is proud of its history and very proud of what we have achieved. And we’re moving on and we intend to… fulfill our true ambitions and destiny to become an independent, developed, and prosperous country.”

As William continued his speech, he spoke of his time in Jamaica on behalf of the Queen, who has a “deep affection” for the country.

“It is no secret that the Queen has a deep affection for Jamaica, forged on her very first visit here with my grandfather, The Duke of Edinburgh, in 1953,” he said. “And, likewise, I have been touched to hear today from Jamaicans, young and old, about their affection for The Queen.”

“She may be my actual grandmother, but every one counts her as their grandmother, too,” he said. “And I’m ok with that!”

He also discussed the “immense contribution” that Jamaicans have made to British life, as well as some of their favorite memories from their time there. He mentioned the couple’s visit to Shortwood Teachers’ College, which provided “inspiration” for his wife’s early childhood development work. On Tuesday afternoon, they went to Trench Town, which was also a highlight.

“Already in our short time here, Catherine and I are delighted to have felt what Bob Marley described so many years ago – the spirit of ‘one love’ that Jamaica has given to the world and which makes this country so special,” he added.
He also enjoyed meeting “some of the world’s best footballers,” such as Raheem Sterling and Leon Bailey, two Jamaican soccer players who now play in the United Kingdom.

“Leon plays for the best football team in the world, the mighty Aston Villa!” said William, who is a fan of the team in the U.K.

He concluded, “Catherine and I only wish we had more time to spend with you all in Jamaica. There is so much more to learn. I hope this will be one of many visits. And next time we’d love to bring our children too. Governor-General, thank you again for hosting us all tonight. I hope you all have a happy evening. And ‘one love.’

On Thursday, William and Kate will conclude their visit to Jamaica and travel to the Bahamas, another of the Queen’s realms, for the final leg of their Caribbean tour.