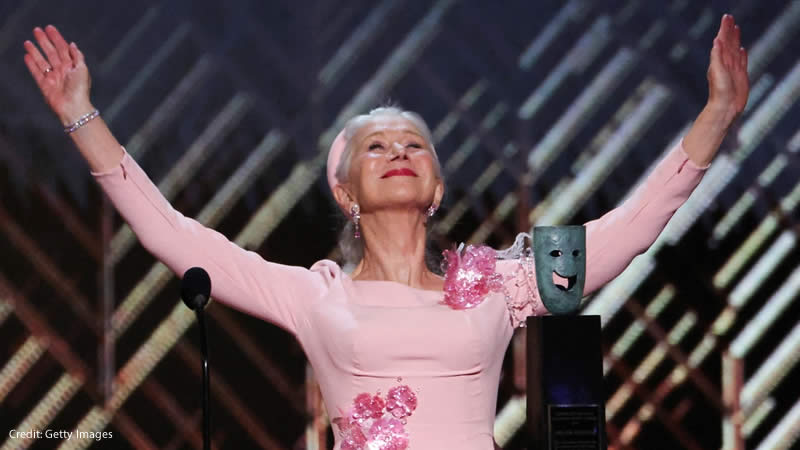 On Sunday, Helen Mirren was honored with the SAG Life Achievement Award at the 2022 SAG Awards.

The SAG Life Achievement Award was given to Helen Mirren.

Kate Winslet and Cate Blanchett presented the award to the English actress on behalf of SAG-AFTRA during the Screen Actors Guild Awards ceremony at The Barker Hangar in Santa Monica, California, on Sunday.

In her acceptance speech, Mirren, 76, said, “Lifetime achievement, sounds so grand, I suppose I’m still alive so by that measure, I’m eligible.” She went on to share her “mantra” that is behind all of her achievements so far: “Be on time and don’t be an ass.”

Mirren then said “Thank you S-A-G so much for this, I hate to say SAG at my age, it’s always S-A-G for me,” she said as the crowd laughed.

“I am simultaneously enormously proud and yet with the understanding that I do not deserve this and there is the conflict I believe you all understand: insecurity versus ego. That cocktail I believe most actors sip in the evening as they contemplate on the gift they received the moment they decided to become an actor,” she said.

Mirren also stated how she struggled in knowing what to say during this speech: “I’ve been angsting about what to say tonight and then it came to me: to all those people with whom I have shared my professional life, the actors!”

“It is the actors I address. From following my dream of following in the footsteps of Eleonora Duse, through the inspiration of Anna Magnani, Monica Vitti, and onto Winslet, Riley, B. Carter, Coleman, Comer, Cole, and Kirby, I joined our tribe of rogues and vagabonds a long time ago and it is you actors that I want to thank. Your perception, your emotional generosity, your great intelligence, your incredible energy, and your helpless dedication to our chosen profession.”
“In my experience, which is now considerable,” she said, “we love and admire each other’s work. Together we laugh, we weep, we worry, we change clothes, we throw up and we suffer diarrhea. Don’t you?”

“A few years ago I had the fiercesome and wonderful challenge of performing Phèdre and standing in that 2,000-year-old space, I felt the ghosts of all those ancient Greeks and vagabonds. I felt their fear, I felt their elation and I felt at one with them. Actors, you are a magnificent tribe. This is for the actors, thank you!”

In November, Mirren was selected the 57th recipient of the award.

As per People, with a total of 13 SAG Award nominations and five SAG Award Actor wins, she is the most decorated SAG Life Achievement winner to date.

“I am honored to have been chosen to receive the SAG Life Achievement Award,” said Mirren in a statement at the time. “Since I was a young actor starting out, I have always been inspired by and learned from American screen acting, so this award is particularly meaningful for me.”

Fran Drescher, President of SAG-AFTRA, added, “Dame Helen Mirren is quite simply a brilliant and luminous talent. Her work runs the gamut of characters from a not-so-retired CIA super-killer and a ruthless Russian spy handler to a Hungarian cleaning lady and the most exquisite Elizabeth II. She has set the bar very high for all actors and, in role after role, she exceeds even her own extraordinary performances.”

“I’ve always felt a kinship with Helen. She’s the Queen of England and I’m the Queen of Queens. She won an Oscar and I’m left-hander of the year. It’s uncanny,” joked Drescher, 64. “And, it is my deep, personal honor to be the first to congratulate Helen as the 57th recipient of the Screen Actors Guild Life Achievement Award. Bravo, my dear!”

“From a pinnacle, you’ve only got two choices and that’s down or up to the clouds,” added the Woman in Gold actress. “Having said that, it’s a great pinnacle to find yourself standing on.”

Aside from her SAG achievements, Mirren has received an Oscar, three Emmys, multiple BAFTA Awards, a Tony Award, a BAFTA Fellowship Award, and The Film Society at Lincoln Center’s Chaplin Award during her career.

She was famously made a Dame of the British Empire in 2003.

Continue Reading
You may also like...
Related Topics:SAG Awards