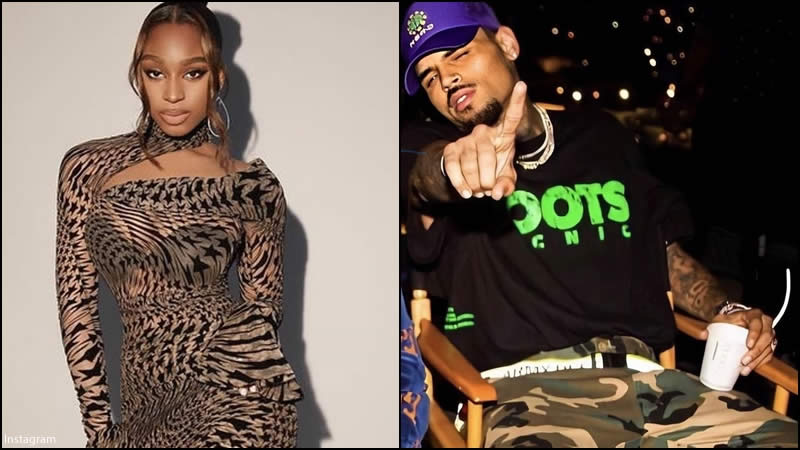 In a video that has reappeared after the release of her latest collaboration with the contentious R&B star, Normani has shown saying that she can “change” Chris Brown’s life.

A number of fans publicly expressed their displeasure with Normani, real name Normani Kordei Hamilton, for working with Brown considering his past after the release of the official video for the singers’ “WE (Warm Embrace)” on Tuesday. Because of the numerous acts of violence against women that Brown has been connected to in the past, including a fight with Rihanna, who was then his girlfriend, Brown has been the subject of heated debate between supporters and detractors over the years.

Karrueche Tran, Brown’s ex-girlfriend, filed a five-year restraining order against him in June 2017 on the basis that he was aggressive toward her and wanted the return of money and jewelry he had given her while they were dating, according to News Week.

In Los Angeles in 2021, Normani is seen on the left. Chris Brown is pictured inset on June 11, 2022, in Las Vegas. After the two artists worked together on a new song, Normani’s remarks that she could “change” Brown’s life reappeared.

As a discussion about Normani’s decision to collaborate with him erupted on Twitter, one user of social media shared a video of the singer discussing Brown when she was interviewed with her former Fifth Harmony bandmates.

In the undated video, Normani is seen excitedly mentioning Brown, prompting her interviewer to interject: “He’s always in trouble though, boo. We can’t have you with him.”

“I can change his life,” responded Normani, undeterred. “I can help him.”

“Well, Rihanna and Karrueche said the same thing, and look,” said the interviewer.

“You can’t fix anybody,” fellow Fifth Harmony singer Lauren Jauregui was heard opening at the time.

An invasion of comments on Twitter was sparked by Normani’s previous comments as well as her new project with Brown.

One Twitter user wrote that “nobody on normani’s team should have to tell her to not work with Chris brown when we all had functioning brains when the abuse happened and he’s had a reputation since. it’s not about her being protected it’s about her supporting him. normani is grown and didn’t care, that’s it.”

Another commented: “why would normani do this to her own career [crying emoji]. chris brown? seriously??”

Another Twitter user, however, pointed out that many other celebrities have worked with Brown even though they did not approve of Normani’s most recent attempt.

They wrote: “Normani is wrong for that but where is this energy for Jack Harlow, Nicki Minaj, Pia Mia, Jhene Aiko, Ella Mai, H.E.R., DaniLeigh, and many others who have worked with Chris Brown? Many of you support them heavy yet I’ve never seen this energy for them.”

Another said that those criticizing Normani should “remember Rihanna is a big fan of Chris brown music too.”

Continue Reading
You may also like...
Related Topics:Chris Brown